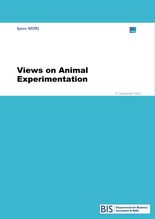 Public opinion research released this week shows that public attitudes to animal research haven't changed much in the UK over the last few years. As was the case in 2008, nine in 10 (87%) accept the idea of animal research to some degree, with three in five (60%) accepting it unconditionally.

There are signs that the public became slightly more neutral or sceptical last year, especially on regulation. This may simply reflect the lower importance that people place on animal research as an issue.

Tracking polls on animal research have been carried out annually by Ipsos MORI for government since 2006, and before that in 1999, 2002 and 2005 for other organisations.

On such measures, most of the movement towards increased support for animal research occurred between 1999 and 2005. It is interesting to consider possible reasons for this.

These were years of heightened animal rights extremist activity in the UK against animal research. Maybe public revulsion against extremism hardened attitudes in support of animal research. Perhaps there was increased awarenesss of why we do animal research, because extremism engendered more debate in the media and amongst politicians, and this led to increased support.

We would also like to think that there was a shift 5—10 years ago towards better and more communications about animal research on the part of the scientific community. For example, one of the forerunners of Understanding Animal Research, the Coalition for Medical Progress was set up in 2002, although high-profile initiatives like the People’s Petition and Pro-Test came a bit later, in 2006.

In all likelihood many factors combined to foster more positive attitudes, but the backlash against the excesses of animal rights extremism was there in the background.

The recent poll briefly addressed wider issues about perceptions of science. Fewer than a third of those polled felt very or fairly informed about science and research, a lower level than in 2008. Perhaps this lower confidence reflects anxiety about the climate change debate, which was prevalent in mid-December when the research was carried out. However, more than four in five people consider that science makes a significant contribution to British society, a finding which changed little over the last seven years.

Awareness of animal welfare and the three Rs

A series of questions were asked for the first time in last December's poll about animal welfare and the three Rs. Few British adults feel well-informed about this. While only one in seven know of the existence of a national centre for improving the welfare of animals in research and reducing their use (NC3Rs), over half would be interested in finding out more about welfare and alternatives generally. People would most like to receive this information through the media, leaflets and websites.

The research was carried out in December last year by Ipsos MORI on behalf of the Department for Business, Innovation and Skills and the full report can be found here.

The ethics of animal research