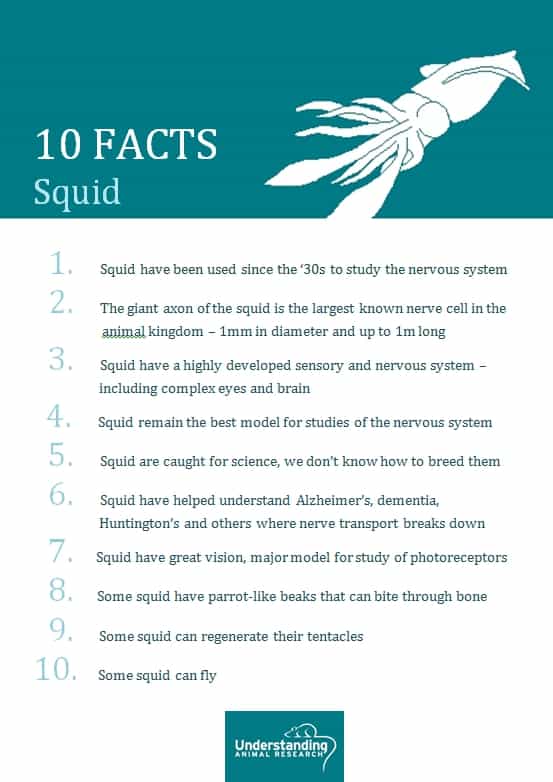 Squid were first studied in the 1930s by zoologist John Zachary Young and physiologist Kenneth Cole and have since been used to study the properties of nerve cells, and have contributed to our understanding of the nervous system. Squid were used to show how the movement of ionic charges across a cell membrane causes an electrical signal which travels through nerve fibres. This work, which forms the basis of modern neurophysiology, received the Nobel Prize in 1963.

2.       The giant axon of the squid is the largest known nerve cell in the animal kingdom – 1mm in diameter for 1mm long

The giant axon of the squid is the largest known nerve cell in the animal kingdom. They can be up to 1mm in diameter and almost a metre long.  The giant axons of the North Atlantic squid Loligo pealeii, are 50 times the diameter of axons in the common crab and 1,000 times those found in humans. Their size allowed electrodes to be placed inside the axon, so that recordings could be made simultaneously inside and outside the cell, measuring changes in current flow across the cell membrane when the nerve fired.  The axon is part of the squid’s propulsion system, and runs from the ganglion to muscles carrying signals which control and co-ordinate movement. The squid’s mantle cavity is usually filled with sea water, but a co-ordinated contraction of the muscles acts as a jet propulsion system, forcing the water out and propelling the squid through the water at up to 10 m/s.

3.       Squid have a highly developed sensory and nervous system – including complex eyes and brain

Squid are molluscs with a highly developed sensory and nervous system, including complex eyes and brain. Despite the obvious differences between squid and humans, the assumption that our nervous systems function in the same way has allowed enormous advances in our understanding of neurophysiology.

4.       Squid remain the best model for studies of the nervous system

Although the invention of 'patch clamp' has allowed electrophysiologists to work with mammals, the squid remains the best model for many studies of the nervous system.

It can take years to deliver a catch of the Loligo pealeii squid, which cannot be kept or bred in captivity and rarely come close to shore. From 1962 when the Laboratory of Cell physiology opened in Montemar, Chile, electrophysiologists also studied the Humboldt squid Dosidicus gigas, one of the largest species in the world and twice the size of North Atlantic squid.

6.       Squid has helped understand Alzheimer’s, dementia, Huntington’s and other diseases where nerve transport breaks down

The transport of molecules from the cell body of a neuron down the axon is crucial to the function and survival of the cell. Research on transport in the axons of L pealeii has shown that biological material is loaded and directed to its target location by a single peptide. This peptide forms part of the amyloid precursor protein, which is thought to play a role in Alzheimer’s disease.

The amyloid precursor protein (APP) is a component of the plaques which form in the brain during Alzheimer’s disease. Mutations in this protein are known to lead to early onset Alzheimer’s, but relatively little was known about its role in healthy cells but some types are likely play a role in neuronal transport in all animals. They could be used as a tag to transport medicines to synapses, in diagnostic studies to determine how much transport has been disrupted in dementia and may be a drug target for Alzheimer’s, Huntingdon’s and other diseases where nerve transport breaks down.

Squid have excellent vision, which they rely on to catch their prey. Rhodopsin is a protein found in the membrane of light-detecting photoreceptor cells in the retina. The retina of squid shares many common features with those found in the eyes of humans and other mammals. When light hits the photoreceptor cells rhodopsin changes shape, and is then able to activate a G-protein, triggering biochemical changes within the cell.

Squid will be particularly useful for researchers studying human melanopsin, another photoreceptor which is responsible for setting our biological clock and for the reflex of our pupils. Melanopsin is more closely related to the squid rhodopsin than to vertebrate rhodopsin found in humans.
http://www.animalresearch.info/en/designing-research/research-animals/squid/

8.       Some squid have parrot-like beaks that can bite through bone

Their razor sharp beak, which is made of one of the hardest materials in the natural world, can crush through bone. This parrot like beak is powered by a mass of muscles that generate a force strong enough to bite through bone.

9.       Some squid can regenerate their tentacles

Not all squid regenerate their tentacles, but certain deep sea squid like Architeuthis can sacrifice them as a defense mechanism, allowing them to quickly escape to safety.

Scientists have known for quite some time that squid have the capacity for short burst flight, and have now also figured out the mechanics behind squid flight. According to the researchers, the squid is able to accomplish this by shooting a powerful jet of water out from their funnel-like stems. Once they're out of the water, they glide by spreading out their fins and arms. This configuration creates aerodynamic lift, enabling the squid to keep a stable arc on its flight. Consequently, the researchers say the squid is truly flying, and not just jumping. And indeed, the technique allows the squid to remain airborne for as much as three seconds at a time.