As I filmed zebrafish a few days ago I wondered why zebrafish have become such an ubiquitous experimental organism? I know they are transparent when young, grow quickly, breed like - well not like rabbits, and are easy to keep, but how was it, I wondered, that this particular species of fish is now bred by the million, and not another species?

My initial searches took me back to Oregon in the 1970's. At this time zebrafish where already a well established aquarium species, and at around this time they started to feature in research into embryonic development (more of this later) but how did the zebrafish, a native of north India, become an aquarium traded fish in the first place?

Another comprehensive search (more than twenty minutes on google) revealed nothing so I turned to the UAR hive-mind that is facebook. Catherina Becker searched for "Zebrabärbling" and discovered that a German tropical fish expert called Paul Matte imported the first zebrafish into Europe in 1905 from East India.

"doesn't say anything about how the fish was imported, but the Germany aquarium fancying community around 1900 was very busy in actively importing new fish species from all over the world. This happened mostly by either sending someone to get new fish or by asking travellers to bring them. There is even a published manual for non-fish experts on how to import fish and make some money by selling them to breeders in Germany."

Christian also suggested I read 'a chapter in Jim Endersby's "Guinea Pig's History of Biology" (2007) on the history of the zebra fish.' Now it just so happened that this book has been sitting on my book-shelf at home waiting for a reason to be read, so I dived in.

Danio rerio was listed in an American tropical fish magazine in 1917 but the first scientific mention (in the US) was by Professor Charles Creaser who wrote an article in 1934 suggesting zebrafish were ideal for embryological research, not least because you could feed them on Drosophila!

It was George Streisinger, shortly after moving to the new Institute of Molecular Biology, in Eugene, Oregon, who really started the zebrafish ball rolling. It took a few years, parthenogenic reproduction in the early 1970's led to the first vertebrate clone in 1981 - covered on the front cover of Nature.

Unfortunately George Streisinger died in 1984 but his colleagues ensured the zebrafish work continued. They set up an informal short course to teach the basics of zebrafish care and wrote The Zebrafish Book, now in its 5th edition.

Why so many? Well, since George Streisinger died biologists have discovered that many biological systems are highly conserved, and so zebrafish have increasingly become a model organism for the study of human disease. Multiple sclerosis, muscular dystrophy, heart disease, the list is ever extending.

As humans share 70% of their genome with zebrafish and 84% of the genes that are linked with human disease, we can expect zebrafish to be swimming in their thousands in research facilities for many years to come.

Note: Danio rerio was named Brachydanio rerio by botanist Francis Hamilton, first described in 1822 in An account of the Fishes found in the river Ganges. 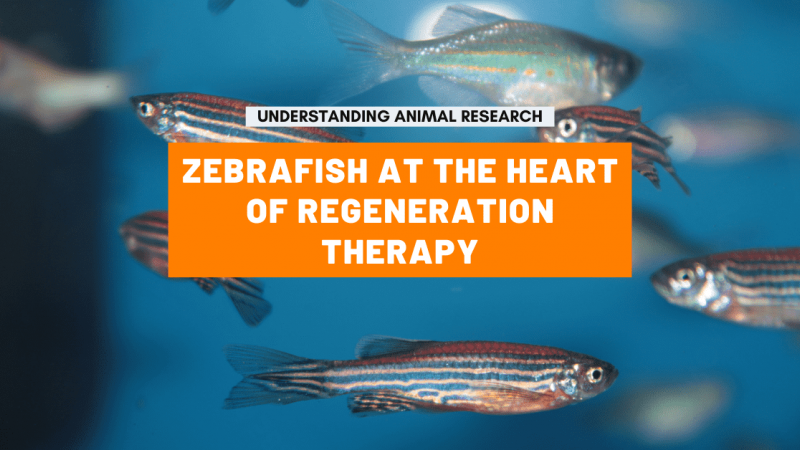 Zebrafish at the heart of regeneration therapy