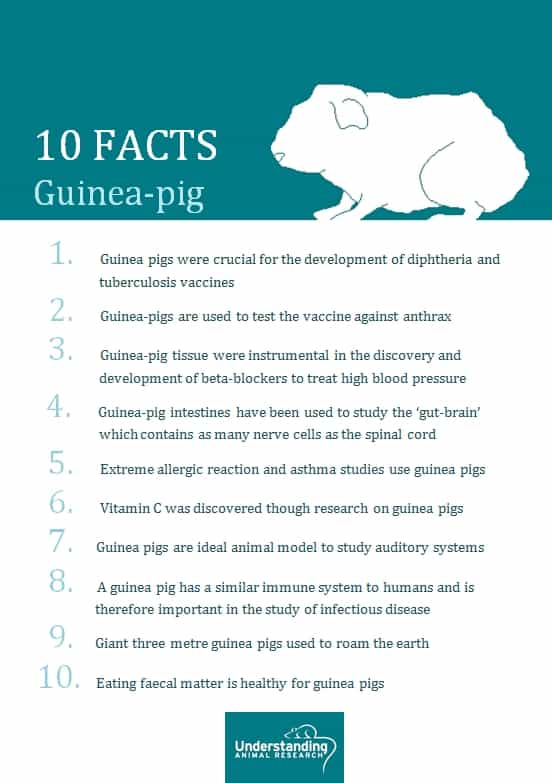 1.       Guinea pigs were crucial for the development of diphtheria and tuberculosis vaccines

In 1888 Pierre Roux and Alexandre Yersin showed that the liquid in which the bacterium Corynebacterium diphtheriae had been grown caused all the well-known effects of diphtheria, by injecting it into guinea pigs among others.
Production of an antitoxin – antiserum to the toxin of the bacteria - on a large scale was achieved in horses, with both the diphtheria serum and the antiserum being standardised using guinea pigs. Widespread use of the antitoxin followed and deaths from diphtheria were approximately halved.
In 1913 von Behring had produced long lasting immunity in guinea pigs, monkeys and asses using a carefully balanced mixture of toxin and antitoxin. This was used in the first vaccination studies on humans.

2.       Guinea pigs are used to test the vaccine against anthrax

Guinea pigs are used in the testing of vaccines against anthrax, currently an important area of biodefence research.

3.       Guinea pig tissue were instrumental in the discovery and development of beta-blockers to treat high blood pressure

The guinea pig is also widely used to provide tissues and organs for research. Guinea pig blood components are widely used, and isolated organ preparations such as guinea pig lung and intestine are extensively used in research to develop new medicines. Such tissue and organ preparations were important in the discovery and early development of beta blockers to treat high blood pressure and drugs to treat stomach ulcers.

4.       Guinea pig intestines have been used to study the ‘gut-brain’ which contains as many nerve cells as the spinal cord

Guinea pig intestine has also been extensively used to study the 'little brain' in the gut, which contains as many nerve cells as the spinal cord. This has given giving insights into not only the control of the gut itself but also the workings of nerve circuits. The information gathered from these studies is being used to develop computer models.

The extreme allergic reaction, anaphylactic shock, has been studied extensively in guinea pigs, which display this reaction more readily and strongly than most other species. Guinea pigs' airways are sensitive to allergens, so it has been widely used in asthma studies. The inhaled medications that are the mainstays of asthma treatment were developed using guinea pigs as were orally-active drugs for asthma such as montelukast. Guinea pigs continue to be useful for the development of improved treatments for asthma.

6.       Vitamin C was discovered through research on guinea pigs

The Spanish conquistadors brought guinea pigs to Europe from South America, where they had been bred domestically, 400 years ago. vitamin C was discovered through research on guinea pigs, and they have since been important in nutritional research.

The structure of the guinea pig ear is similar to that of humans, meaning that their hearing range is also similar. Guinea pigs also display the Preyer reflex used in checking for deafness, in which the outer ear moves in response to a whistle. Guinea pigs are therefore a preferred animal model for studying auditory systems, and in 1961 Georg von Békésy was awarded a Nobel Prize for describing the mechanical mechanisms of the cochlea in guinea pigs. In 2003, the first successful attempt to regenerate hair cells – sensory cells of the auditory system which convert sound to an electrical signal - in the inner ear of a mammal, was achieved in guinea pigs.

8.       A guinea pig has a similar immune system to humans and is therefore important in the study of infectious disease

The sensitivity of the guinea pig infections, and the similarities of its immune defence system to that of humans, has made it important in the study of infectious diseases. The German scientist Robert Koch used guinea pigs to discover that TB was caused by the bacterium Mycobacterium tuberculosis, in 1882. In 1919 research showed that inoculation of guinea pigs with a small amount of blood from Yellow Fever patients produced a mild reaction in the animals. The same animals were later resistant to infection with Leptospira icteroides, while animals which had received no previous inoculation, or which had been inoculated with blood from malaria patients, died. The guinea pigs were said to have ‘Aquired Immunity’ to L icteroides.

Buffalo-sized Hoberomys pattersoni, judged to be the world's largest extinct rodent based on newly classified fossils, used to weigh upwards of 1,500 pounds. The ancient creature lived eight million years ago used to roam the lush banks of the ancient Orinoco delta in northwestern and is an extinct cousin of today's guinea pig. It would have lived a semi-aquatic life, munching sea grass and dodging other strange, gargantuan creatures such as three-metre-long crocodiles, lion-sized marsupial cats and huge, flightless carnivorous birds.

Guinea Pigs are coprophagic which means they eat their own droppings as part of their normal digestive process. In most cases, they are selective, eating only the smaller, moister droppings, which they usually take directly from the anus. This is vital to the good health of all guinea pigs as it provides them with necessary nutrients.