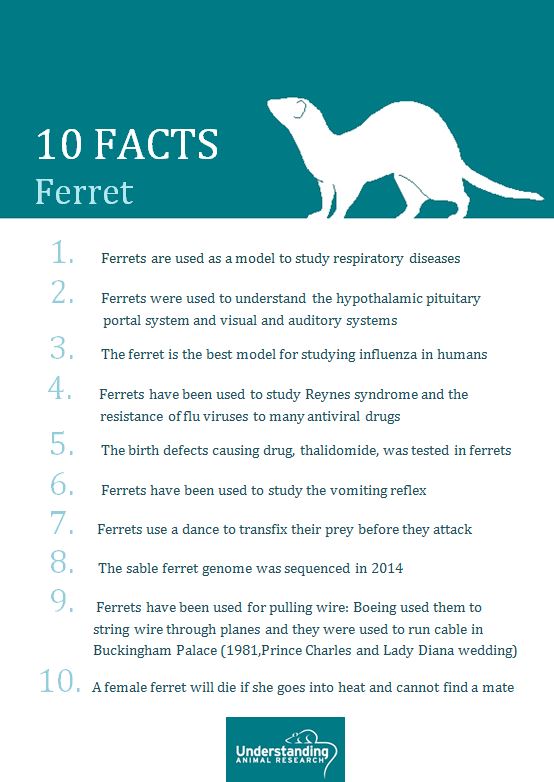 1.       Ferrets are used as a model to study respiratory diseases

Ferrets are often used as models to study respiratory diseases as they often contract the same respiratory viruses as humans and their lungs and airways bare a striking physiological similarity to human’s. The ferret is closer biologically and physiologically to humans than the mouse or the rat.

2.       Ferrets were used to understand the hypothalamic pituitary portal system and visual and auditory systems

3.       The ferret is the best model for studying influenza in humans

The ferret is the best model for studying influenza in humans. Types A and B of human influenza naturally infect the ferret, and the infection closely resembles that in humans, with similar clinical indicators, pathology and immunity. Ferrets are used to study age-related susceptibility to influenza infection and have also played an important role in understanding the development process of typical influenza infections. They have helped to understand transmission and reassortant variants of the virus, and in vaccine development ferret models are used to produce anti-sera to past infections

4.       Ferrets have been used to study Reynes syndrome and the resistance of flu viruses to many antiviral drugs

5.       The birth defects causing drug, thalidomide, was tested in ferrets

6.       Ferrets have been used to study the vomiting reflex

The species that tend to have been used to study vomiting are dogs and cats, ferrets and more recently the house musk shrew -  all have a vomiting reflex.  The literature on dogs and cats goes back about 100 years, but increases around 1950.  The ferret and the musk shrew were introduced in the 1980s. The ferret has become more commonly used in more recent times.

7.       Ferrets use a dance to transfix their prey before they attack

In the wild, ferrets perform a hypnotic dance that sends their prey into a trance. Domestic ferrets also perform this dance, but they use it for play instead of hunting.

The ferret is an important genomic reference point for researchers to compare their results to. The recent sequencing of the ferret’s genetic information helps scientist better understand how it copes biologically with respiratory pathogens, to further improved strategies to preserve the health of both humans and ferrets.

9.       Ferrets have been used for pulling wire: Boeing used them to string wire through planes and they were used to run cable in Buckingham Palace 91981, Prince Charles and Lady Diana’s wedding

Event organisers of hire ferrets to lay TV, lighting and sound cables along tunnels under stages and in inaccessible places. This unusual engineering solution is sometimes used because the rods used to push the cables through tiny tunnels which snake about underground don’t work well enough. Using tiny nylon harnesses, the cables are rigged up to the ferrets which are encouraged down the tunnel entrance.

10.   A female ferret will die if she goes into heat and cannot find a mate

A female ferret will die if she doesn’t find a mate. When she is in heat and if she doesn’t mate, the female will secrete high levels of oestrogen. If this hormone stays in the blood for a prolonged period of time, it will cause a progressive depression of bone marrow which results in a severe, life threatening aplastic anaemia. The female simply needs the act of mating – not necessarily pregnancy – which will induce ovulation and will take her out of estrus.