Why are dogs used in research?

Dogs have been used in scientific research for a long time. They are physiologically similar to humans and suffer from similar diseases such as diabetes, epilepsy, cancer, and eye disease. Dogs can be easily trained to cooperate in research, for example, they can be taught how to jump on weighing machines and to accept muzzles in respiratory research. Beagles are used in the majority of research involving dogs. Those used are from particular strains and the dogs are genetically extremely alike. Beagles love to live in packs, and content in the company of other dogs, making them well-suited to life in a laboratory setting.

For more information on why dogs are used in research: https://www.understandinganimalresearch.org.uk/what-is-animal-research/a-z-animals/dog

What types of research are dogs used in?

Due to the physiological similarities between dogs and humans, dogs are useful in various types of research. Their genome has been sequenced and due to their genetic similarities with humans, they are often used in genetic studies.

Dogs are primarily used in regulatory research, also known as toxicology or safety testing. This type of research is required by law to test the safety and effectiveness of potential new medicines and medical devices before they are given to human volunteers during clinical trials. Dogs are also used to test the safety and efficacy of veterinary medicines, and in nutrition studies to ensure that pet dogs eat healthily, particularly when they are prescribed specialist diets by their vets.

A smaller number of dogs are also used in translational research (also called applied research) to help us learn about human and animal diseases so that we can develop treatments. Examples of translational diseases can be found below.

What products are tested on dogs?

Dogs are primarily used to test the safety of new medicines and veterinary products. It is illegal to test cosmetic products, household products like bleach, and tobacco products on animals, including dogs, in the UK.

Which companies test on dogs?

Because dogs are primarily used to test new medicines for safety and efficacy, they are used mostly by pharmaceutical companies and contract research organisations, which do specialised animal research on behalf of other organisations.

Are cigarettes tested on dogs?

No, it is illegal to test tobacco products on animals, including dogs, in the UK.

Are cosmetics tested on dogs?

No, using animals, including dogs, to test finished cosmetics products or their ingredients has been illegal in the UK since 1998.

How are dogs used in regulatory research?

Vets have studied dogs for many years, and this extensive knowledge helps researchers understand how dogs respond to medicines. Their anatomy, physiology and behaviour are better understood than any other animal.

The law requires that new medicines are tested in two different species of animal to ensure safety and effectiveness. This includes a rodent species, usually a rat, and a non-rodent species, usually a dog, pig, or monkey. This type of testing is vital because it protects the lives of human volunteers in clinical trials. Dogs are used because their physiology is well understood, allowing researchers to understand how small doses of a substance can affect the dog’s organs (heart, lungs, brain) and body systems (central nervous system, digestive system, respiratory system).

An expert working group of government and commercial organisations recently reviewed the legal requirement for using two species in regulatory research and concluded that it continues to be necessary in order to protect human patients and clinical trial volunteers.

In regulatory research, dogs are primarily used for repeat-dose toxicity testing. These studies are designed to identify effects that can occur during long-term exposure to a new medicine. Dogs are given a daily dose of the compound for 28 days or longer, usually in their food, and the effects on their overall health are monitored.  In these research studies, the last thing that anyone wants to see is a dog that is made unwell by the new medicine, as this would mean that it is very likely to make humans unwell.  Researchers want the dogs to remain healthy and content throughout the trial.

How are dogs used in translational research?

Dogs are used to help develop us understand human and animal health and disease, and to develop new medicines that can benefit both humans and animals. Here are some examples:

DMD is the most common fatal genetic disease in children. It mainly affects boys and young men – about 2,500 people in the UK have the condition. Children born with the degenerative disease have a genetic mutation that stops them producing dystrophin, a protein that is vital for muscle strength and function. The same disorder also occurs in many dog breeds.

Using gene-editing technology, scientists have been able to restore dystrophin in dogs that have been bred to exhibit the most common genetic mutation seen in DMD patients. Within several weeks the missing protein was restored in muscle tissue throughout the dogs’ bodies.

The goal is to show that this is safe and effective in dogs before moving into human trials. If successful, the treatment could be applied to pet dogs and people with this muscle-wasting condition, for which there are currently very few treatment options available.

An anti-rabies vaccine for dogs was developed using dogs. Infected nervous tissue from rabbits was injected into the brain of dogs to induce rabies. When this was given over a two-week period, with a stronger dose each time, the dogs became resistant to the virus. Afterwards a vaccine for humans bitten by rabid dogs was developed. The vaccine continued to be used until after the Second World War when it was replaced with one produced in cell culture.

Dogs have played an important role in heart research. Ventricular fibrillation, a common cause of cardiac arrest where the muscles of the heart are uncoordinated and fail to pump blood, was first described in dogs. It was later discovered that electrical currents could also be used to restore the normal rhythm to a dog’s heart, thereby laying the groundwork for the first electrical defibrillator. Subsequent research with dogs aided the development of closed-chest defibrillation and eventually, pacemakers.

Dogs were also essential during the development of artificial heart valves. Initial designs were tested and modified in dogs before being trialled successfully in human patients.

In 1889 scientists showed that removing the pancreas from a dog caused diabetes. This was the first experiment to demonstrate that insulin was responsible for regulating blood sugar levels. Insulin was later shown to reduce blood sugar in dogs whose pancreas had been removed. Eventually, preparations were prepared using insulin from beef pancreases, which were successfully used in dogs and diabetic patients.

Because dogs are companion animals and are often seen in veterinary clinics, there is a demand for treatments that will keep them healthy. The use of dogs in veterinary research has helped in the development of essential medicines and treatments for dogs including the Distemper vaccine, worming tables, and flea treatments.

When dogs have been involved in the development of a medicine or treatment for humans, it is often a relatively small step to understand how the same treatment could be used for veterinary medicine. Many medicines used in dogs were originally developed for humans.

For more examples of where dogs have been used in research: https://www.animalresearch.info/en/designing-research/research-animals/dog/

How many dogs are used in research?

In 2020, there were 4,340 experimental procedures carried out on dogs, with the majority related to regulatory testing for human medicinal products. The actual number of dogs used was slightly less than the number of procedures because sometimes a dog can be used for more than one experimental procedure, although this is done as little as possible in order to minimise the distress to the dogs.

For more information on how many animals are used in British research: https://www.understandinganimalresearch.org.uk/what-is-animal-research/numbers-animals

For more information on the severity of experiments: https://www.understandinganimalresearch.org.uk/what-is-animal-research/understanding-animal-procedures

How is dog research regulated?

The core piece of legislation governing experiments is the Animals (Scientific Procedures) Act 1986. In 2012, the Act was revised and updated to conform to European Directive 2010/63/EU on the use of animals in science, however, this directive was already heavily based on existing UK law. These controls are widely regarded as the strictest in the world and are subject to ongoing refinement and review.

Central to the Act is a harm-benefit assessment which must be applied before any research project involving animals can go ahead. This means that the potential benefits of the research must outweigh the potential animal suffering (harms). For an animal experiment to take place, three levels of licencing must also be granted. A licence is needed for the establishment where the research is happening, for the specific project the experiment is related to, and for the person carrying out the experiment.

Animals can only be used when there is not a non-animal alternative available that can give equivalent data. Dogs have special protections under the Act and can only be used in research when another animal is not suitable.

Are there any alternatives to testing on dogs?

Non-animal methods, also referred to as alternatives, such as computer models and cell-based research are used alongside animals in research. Alternatives help researchers answer questions about new medicines before they are tested on animals. For example, a computer model can help identify whether a new medicine is likely to be toxic to a dog by comparing it to compounds with a similar molecular structure that have known effects. However, these alternatives are not able to fully replicate the complexity of a whole living animal, which is why animals, including dogs, are still essential in making sure new medicines are safe and effective before they are given to humans for the first time.

The life science sector is invested in using as few animals as possible in research and Government funded organisations such as the National Centre for the Replacement, Refinement and Reduction of Animals in Research (NC3Rs) fund projects that look to replace the use of animals in research.

How are dogs looked after?

The use of animals in research is highly regulated, including the way the animals are housed and cared for. It is important that all research animals live as well as possible. Stressful conditions are not only upsetting for the animals themselves and the people that look after them but can also have a detrimental impact on the results of the research.

Research dogs live in large enclosures together with their pack mates. Lab technicians look after the dogs and play with them every day. The dogs are fed and watered daily, and the environment (lights, temperature etc.) is controlled automatically. The cages are cleaned daily, and the space is big enough to have a toilet area separate from the bed and play area. Dogs are intelligent enough to keep these areas separate, and there's plenty of space to allow them to do so. Because the dogs live together, their social needs are met by other dogs. Unlike pets, they do not require the constant company of humans.

For more information on housing for research dogs: https://www.nc3rs.org.uk/3rs-resources/housing-and-husbandry-dog

Where do research dogs come from?

Dogs used in research in the UK must either be purpose-bred at the establishments where they are used or bought from Home Office licensed breeders.

Why are people protesting at MBR Acres?

MBR Acres is a breeding facility in Cambridgeshire, England, that breeds dogs for scientific research. Protestors are spreading misinformation about conditions at the facility that is rejected by the government inspectorate and would be forbidden under UK legislation. The dogs at MBR Acres are well looked after and bred to help develop life-saving medicines by other companies. 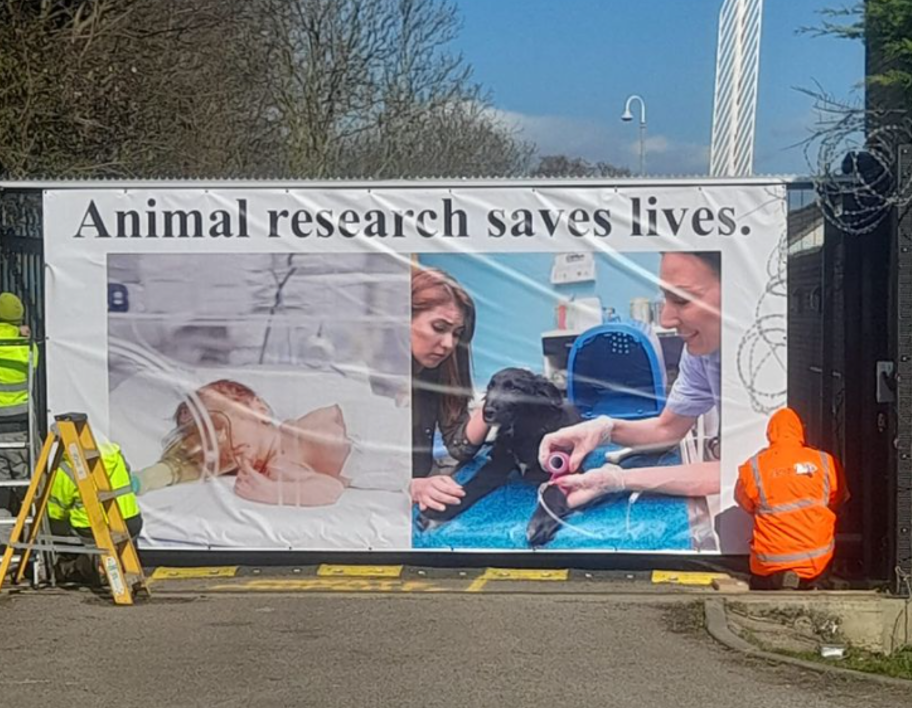