Chickens (Gallus gallus) belong to the family Phasiandae and are one of the most domesticated animals. Although they are generally believed to have evolved from the wild red jungle fowl of India, the scientific name for the chicken is contested. Chickens are less than 70cm (27.6 inches) standing and have an average weight of 2.6kg (5.7 pounds). Chickens are omnivores, their diet consists of a mixture of both plant and animal matter, apart from the typical seeds and berries, chickens have been known to eat mice and lizards! Chickens have been used in research for a long time, in fact, they were the first animals to be used to demonstrate inheritance, they were also the first animals to have their genome sequenced. They are currently not the most commonly used in research, only making up around 8% of the animals used in research in the UK.

Why are chickens used in research?

Because chickens have been domesticated for such a long time, there is a lot of information available on their physiology which is very useful for researchers. Chickens lay eggs, which means their embryos develop outside the mother’s body. This allows researchers to monitor the development of the chick at every stage including development of the nervous system, limbs development and cell migration.

What types of research are chickens used in?

Chickens have been historically important to the study of diseases including cancer. In the early 1900s, Peyton Rous discovered that a virus could cause cancer. He discovered this by grinding up tumour cells from a hen and filtering out the tumour cells and bacteria. The presence of tumours in the new chickens he injected his preparation into showed that “a minute-parasitic organism” was causing the tumours. With a better understanding of what happened to these chickens, scientists now refer to the type of virus that Rous described as a retrovirus.

Chickens are also important in producing vaccines. Ernest Pasture came up with the method of making vaccines by growing and inactivating viruses and bacteria in chicken embryo and fertilised chicken eggs. The virus is injected into the allantoic fluid of the egg. This allows the virus to replicate and the fluid that has the viruses are harvested and purified. This method was used to develop vaccines for chickenpox, smallpox, and yellow fever and other infectious diseases. Chicken egg-based vaccine production has been used for a long time and continues to be used along with other methods to produce vaccines.

How are the chickens looked after?

The use of animals in research is highly regulated, an important part of that regulation is ensuring the animals are housed and cared for correctly. Research shows that chickens should be housed with appropriate and sufficient environmental enrichment and space. 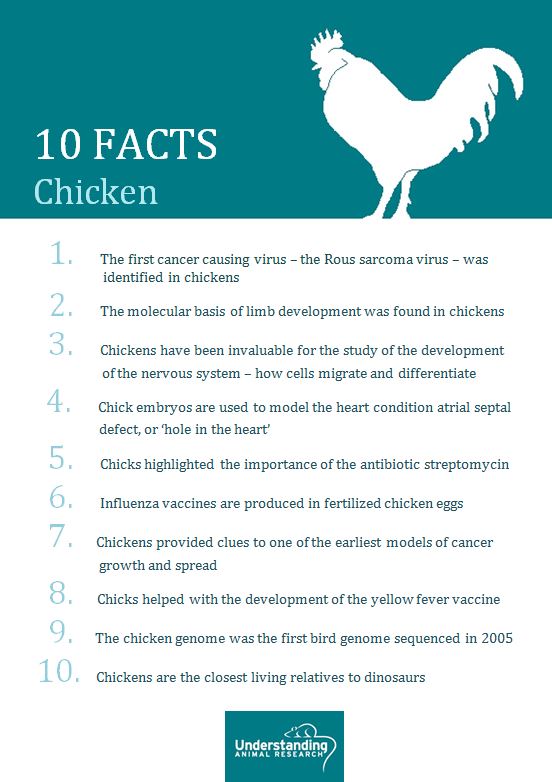