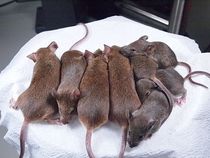 Dolly is probably the most famous animal ever to take part in a scientific experiment. The first monkey into space is a strong contender you might say, but can you name him? Dolly the sheep was the first mammal to be cloned from an adult cell – rather than an embryonic cell – to great fanfare back in 1996. She was a significant milestone in cloning, an almost sci-fi reality that has been exciting scientists and the public alike for nearly 80 years.

Now another milestone appears to have been reached. Last month scientists in Japan announced that they have developed a new technique to allow the cloning of mice indefinitely without incurring genetic abnormalities. In an experiment that started in 2005, the team led by Dr. Teruhiko Wakayama tweaked the method that created Dolly, called somatic cell nuclear transfer (SCNT), to produce 581 healthy clones of one original ‘donor’ mouse, through 25 consecutive rounds of cloning. Up until now scientists have believed the accumulated damage to DNA caused by cloning could severely limit its use.

Mankind has been selectively breeding animals for thousands of years to get the desired characteristics – more milk, a faster runner, and even cuter faces in the case of dogs! But the need to breed two animals together has always meant a certain lack of control over the genetic makeup of the offspring was inevitable. Cloning on the other hand ensures exactly the undiluted characteristics of one animal are passed down. So a farmer can grow his herd safe in the knowledge that all his new cows will be equally good milk producers (and female!), and a scientist who has spent years genetically engineering a mouse to reproduce the symptoms of Alzheimer’s can make many exact copies, allowing her to continue her experiments beyond the two year life span of a mouse. Cloning has also been used to bring extinct species back to life and to save rare animals from the brink of extinction.

Robert Briggs and Thomas King kick-started modern cloning four years after the first monkey was launched into space when they cloned Northern Leopard Frogs in 1952. The duo was apparently unaware of the work of Hans Spemann, who in 1928 used a rudimentary but similar technique with amphibian embryos. He created hybrid animals rather than clones but nonetheless is widely credited as the grandfather of cloning thanks to his 1938 paper proposing a "fantastical cloning experiment".

The cloning method hasn’t changed drastically since these early experiments. The cell nucleus, which contains genetic material, is transferred using micro-pipettes from embryonic cells to surrogate eggs that have had their own nuclei removed. As the cells are from such early stages of development, the transferred genes were already prepared to create a whole new animal.

The cloning of mammals accelerated in the early 1980s using embryonic cells of mice and sheep, among others. But mating was still needed to create the embryos, meaning that mature animals that proved to have valuable characteristics could not be replicated without mating them and so risking diluting their genes. A technique that used the nuclei of adult cells, with their unadulterated DNA, was needed. However, DNA inside cells undergoes many changes through ageing and as cells specialise and no-one knew whether these changes were irreversible or not.

Scientists moved a step closer to cloning an adult animal in 1995 with Megan and Morag, two sheep cloned from differentiated embryo cells, which had become more specialised and so more like adult cells. The same team created Dolly a year later, showing that the DNA of old cells could be reprogrammed when placed into a fresh egg cell to produce a whole animal. Since Dolly, cats, dogs, camels, horses and goats have all been cloned. Despite progress, the efficiency of the procedure remains low and the few cloned animals that are produced often have severe developmental abnormalities and health problems, probably due to damaged DNA.

The latest work of Dr. Teruhiko Wakayama and his team brings scientists a step closer to perfecting cloning. Their work with mice is allowing them to better understand what is happening to the DNA and to adjust the cloning procedure to avoid the pitfalls. Their recent success shows that cloned animals can be healthy, even for many generations.

The greatest prize perhaps, if scientists are able to overcome these challenges, is to be able to grow replacement organs genetically identical to the patient by cloning one of their own adult cells. Space travel and growing new body parts were once ideas found only in science fiction but are now science fact, thanks in no small part to animals like Dolly and Albert. Who’s Albert? The first monkey in space of course!