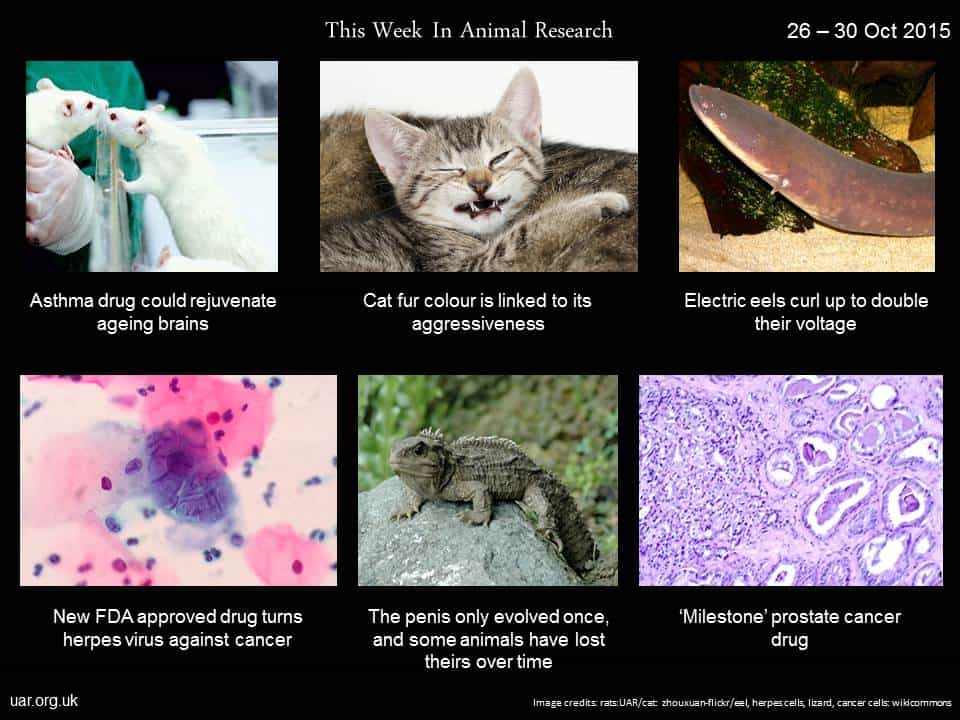 A study in rats suggests that a cheap asthma drug may help rejuvenate ageing brains. A six week study showed that montelukast improved memory and learning in old rodents by reducing inflammation in the brain and encouraging the growth of fresh neurons. The study involved rats remembering wheee platforms in a swim test were located.

Ludwig Aigner at Paracelsus Medical University in Salzburg,said:
“The important thing is that while we saw effects on neurogenesis, we also saw effects on other systems in the brain. The drug reduces neural inflammation in the brain. But we also looked at that blood-brain barrier and that is partially restored. We know in aged brains that the blood-brain barrier is leaky and that contributes to neural inflammation,”

The FDA has approved a first-of-a-kind drug that uses the herpes virus to infiltrate deadly cancer tumours and shrink them. The drug, imlygic, is injected directly into tumour tissues where it bursts melanoma cells open and triggers immune responses to kill melanoma cells in the tumour and elsewhere in the body. However, it had not been shown to extend life - about 16% of patients injected with the drug saw their tumours shrink, compared with 2% of patients who took more conventional cancer drugs.

The first drug that targets precise genetic mutations in prostate cancer has been shown to be effective in mice and humans. Prostate cancer is the fifth most deadly type of cancer in men. The drug, olaparib, had low overall success, but slowed tumour growth in 88% of patients with specific DNA mutations. It targets mutations that change the way DNA is repaired. The future of cancer medicine is treating cancers by their mutated DNA rather than what part of the body they are in. The advantage of targeted drugs is they can be given only to those patients who will respond which both saves money and spares patients unnecessary side effects.

Cat fur colour is linked to its aggressiveness

A statistical survey has appeared to make a connection between a cat’s fur colour and its inherent aggressiveness towards humans. As the survey reveals, female “orange” cats (tortoiseshells, calicos, and torbies), female black-and-white cats, and female grey-and-white cats all tend to be more aggressive towards humans during everyday interactions, handling, and veterinary visits. The calmest cats were those with grey, black, white or tabby fur. However, correlation doesn’t necessarily imply causation, however, there might be a link here: this could be a phenomenon known as a “spandrel.” In evolutionary biology, a spandrel is a physical feature that appears as a by-product of the evolution of another characteristic. Fur colour changes could be an indirect effect of any inherent genetic disposition towards being more aggressive.

Electric eels curl up to double their voltage

An electric eel can jolt its prey with hundreds of volts of electricity, but if it curls up around its victim first it can double that zap, according to a new study. An eel’s electric organ, which is comprised of horizontal strands of nervous tissue running along the length of its body, generates an electric field inside the animal with the positive pole developing near the head and the negative occurring near the end of the tail. Curling up around prey brings the two poles closer together and causes an increase in the electric field strength in between.

The penis only evolved once, and some animals have lost theirs over time

The adult tuatara lizard has no penis. But among amniotic animals—reptiles, birds, and mammals—that’s not even that weird. The fact that the tuataras don’t have penises makes them a useful study organism because it allows scientists to ask whether the lizards’ ancestors had penises and lost them, or never had them to begin with. According to new research the last common ancestor of all the amniotes did, in fact, have an erectable phallus. The team discovered that, even though the tuatara has no external phallus, it grows the beginnings of one during development. At some point down the line this “genital swelling” recedes and the lizards are born sans phallus. The embryonic development suggests that amniotic penises only evolved once, but that some animals have lost theirs over time.