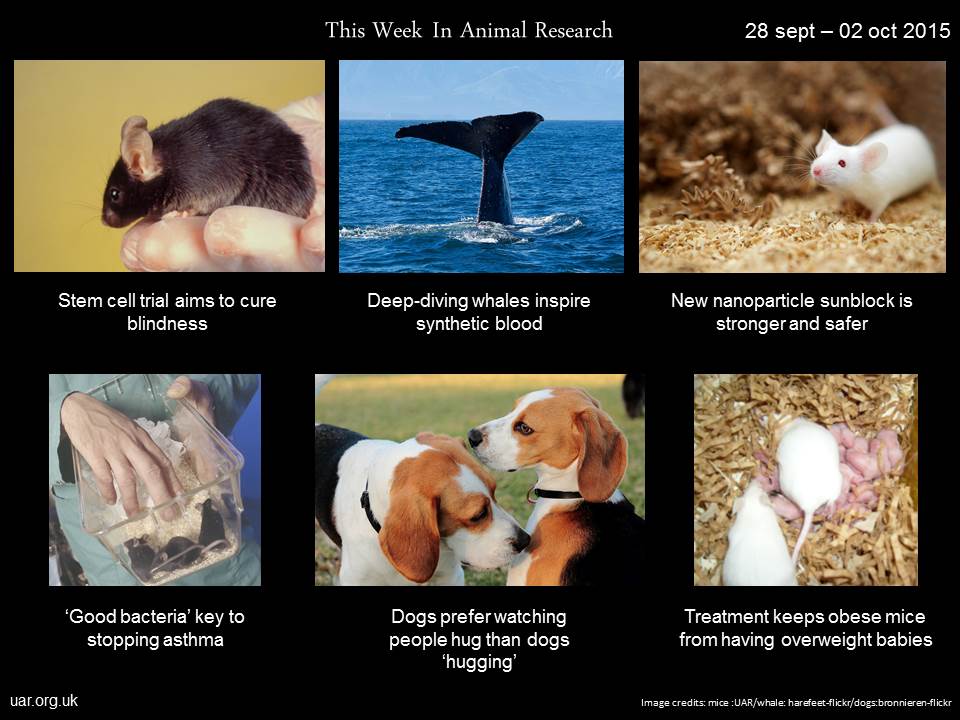 A big story yesterday on the stem cell trial for treating age-related macular degeneration in humans. Ten patients are undergoing surgery to insert specialised eye cells directly on to the back of the retina. What many people will be unaware of will be decades of pre-clinical work in rodent models which made this possible. So far the results of the clinical trial look promising, but the results won't be known until at least the end of the year.

Prof Peter Coffey, of the UCL Institute of Ophthalmology, who is co-leading the London Project, said:
"We won't know until at least Christmas how good her vision is and how long that may be maintained, but we can see the cells are there under the retina where they should be and they appear to be healthy."

A protein found in whales could hold the key for developing synthetic blood. During deep dives, whales draw on a large store of oxygen from their muscles in the form of myoglobin which is 60 times more stable than the human protein. Researchers believe that this protein can be used as a model for creating synthetic haemoglobin – the related protein found in red blood cells that carries oxygen around the body. If successful it may be possible to create synthetic blood for life-saving transfusions.

John Olson, biochemist from Rice University and co-author of the paper said,

"Whales and other deep-diving marine mammals can pack 10-20 times more myoglobin into their cells than humans can, and that allows them to 'download' oxygen directly into their skeletal muscles and stay active even when they are holding their breath,”

Scientists have made a nanoparticle-based sunscreen that is longer lasting and less likely to leak into the body. The sunscreen we know today block out sunlight entirely with a zinc-oxide paste or by chemically filtering out harmful UV rays before they contact the skin. However, they can also penetrate the outer layer of the skin and leach deeper into the body, possibly causing DNA damage. However, researchers have managed to find a type of nanoparticle that can tightly adhere to protein-rich surface – aka skin – and have engineered them to encapsulate a chemical UV filter. Each nanoparticle is—in essence—a sunscreen-filled bubble that forms an ultrathin cloak by sticking to the skin. Tested in mice, the new sunblock not only stayed outside the body but was more efficient than traditional sunscreen.

Dogs are experts at reading other dogs’ body language, and also at interpreting human faces for cues as to intention and mood. Like people, they study the area around the eyes on the right side of a person’s face, where human emotions appear most intensely. To see how similar dog and human social reading skills are, scientists compared humans and dogs when looking at everyday scenes. Both dogs and people preferred looking at social (where people/dogs interact) versus non-social scenes. Surprisingly, dogs were more interested in people hugging compared to dogs greeting each other, and they spent more time looking at both characters, suggesting that they needed more time to interpret their postures. The same could be said about humans and a preference to dogs greeting. This suggests that the task of interpreting the other species’ cryptic expressions takes extra effort, even for experts.

Exposure to ‘good bacteria’ early in life could prevent asthma from developing. Scientists have shown that if 4 types of bacteria are missing from the human body by age 3 months, then these children have a higher risk of asthma by the time they are 3 years old – the first few months of life are crucial. Experiments in mice confirmed these results – giving the bacterial cocktail to previously germ-free mice reduced inflammation in the airways of their pups. Scientists believe the solution to the asthma problem might be in using the right bug at the right time.

Children born to obese mothers are predisposed to obesity and other health problems themselves. Recent animal studies also suggest it works also the other way around - malnourishment in the womb changes the expression of DNA in ways that can be passed down for generations. What happens in the uterus to transmit these risks is still unclear but a new study in mice points to the placenta. The study shows a hormone acting on the placenta can protect the offspring of obese mice from being born overweight. A natural way of boosting this hormone is by eating fatty acids found in fish oil for example, or diet and exercise. This study offers important insight into foetal overgrowth.