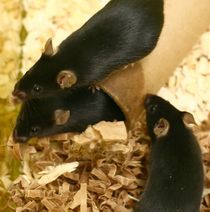 A global effort announced recently could lead to the ultimate mouse model of human disease. The International Mouse Phenotyping Consortium (IMPC) aims to explain and share the functions of genes in mice. It will also select special areas for study such as the genetics of obesity and age-related diseases. Because it is impossible to predict the function of a gene from its sequence alone, scientists still need to study the effects of many genes.

IMPC will build an open-access database of genes which scientists can turn to when they need to find out more on an unfamiliar gene. To compile the database, scientists will start with genetically identical mice. They will then systematically knock out or deactivate individual genes of the 20,000 found in the mouse genome – creating thousands of new strains. Each new strain will be thoroughly analysed for physical and behavioural differences. The resulting catalogue will list genes and their related traits, or phenotypes.

Phenotyping just one mutant strain can take one lab three years, but the IMPC aims to complete this project in a decade. Currently the US National Institutes of Health (NIH) invests hundreds of millions dollars a year in small scale grants to create and catalogue single strains, so is expected to save time and money by investing $110 million in IMPC. Contributions from other countries have yet to be secured. It is hoped that the European Commission, which has spent some $300 million pioneering systematic phenotyping of mice over the past 10 years, might be able to raise the rest of the money. But the UK’s Medical Research Council has warned that politicians would need a lot of convincing that mouse genomics was more deserving of funds than other scientific projects.

For now, there is sufficient funding from NIH to run the project over the next five years. Although the total cost to complete the database would be $900 million, scientists are confident it will be completed even if stretched over a slightly longer period.

The IMPC is already in discussion with the scientific community over which areas of analysis should take priority. At the top of the list is keeping a colony of ageing mice to study age related disease over a period of time, by monitoring the changes to genes. The Consortium will work with clinical and basic research scientists to conduct primary screens on 4,000 knockout mice in its first five years. Any researcher can request a particular gene to take priority in the study, and the IMPC will also select a proportion at random.