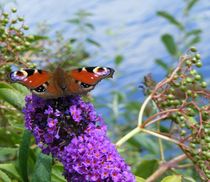 In today’s staff blog post, Head of Online Communication Richard Scrase wonders where all the butterflies have gone.

I travel into work by train and at the moment the route is a glory of flowering Buddleia, sometimes known as the butterfly-bush. The flowers are releasing a sweet rich scent, calling in the pollinators to their free meal, but as far as I can see, no butterflies are answering the call.

I’ve been feeling increasingly anxious about the lack of butterflies. My biological memory stretches back about forty years, to a time of easily counting dozens of butterflies feeding from a single Buddleia bush.

So what has changed? Habitat loss must be part of the explanation and would explain a lessening of the numbers, but the almost complete loss? The IUCN affiliated Task Force on Systemic Pesticides has an explanation.

Their recently released report1 lists the impact of these insecticides on ecosystems and calls for a ban on neonicotinoids and fipronil (neonics) because they are harming the environment, posing a threat of the same magnitude as DDT did in the 1960s.

The analysis, known as the Worldwide Integrated Assessment (WIA), to be published in the peer-reviewed Journal Environment Science and Pollution Research, finds that neonics pose a serious risk to honeybees and other pollinators such as butterflies and to a wide range of other invertebrates such as earthworms and vertebrates including birds.

The Task Force were by no means the first to highlight concerns about neonicotinoids. On 24 May 2013 a restriction on the use of three pesticides (clothianidin, imidacloprid and thiamethoxam) belonging to the neonicotinoid group was adopted by the European Commission. The restriction will be reviewed (though not necessarily rescinded) within two years.

Neonics are a popularly used preventative pesticide, being sprayed over crops or coated on plant seeds, frequently before there is a pest problem. They represent around 40 per cent of the insecticide market, and global sales are worth over one billion pounds (pre-ban).

The EU ban targets pesticides used in the treatment of crops attractive to bees and for cereals, with the exception of uses in greenhouses and uses after flowering. The Commission’s decision affects all oilseed crops, all maize crops, and any cereal crops sown between January and June.

My train also passes through fields of oil-seed rape and earlier in the year the fields were bright with their yellow flowers, so what consequences would there be for this crop from the current ban? In a research review2 there seem to be several implications of the ban. Firstly, there are few alternative insecticides, and those there are such as pyrethroids are already losing their efficacy to pest resistance. Secondly, the losses from untreated crops are likely to be such that growing the crop becomes unprofitable, and not growing oil-seed rape would impact on the balance of payments.

The authors conclude by strongly suggesting that regulatory agencies apply more precautionary principles and further tighten regulations on neonicotinoids and fipronil and start planning for a global phase-out. I agree, even with the consequences for our present pattern of agriculture.

2 Implications of the restriction on the neonicotinoids: imidacloprid, clothianidin and thiamethoxam on crop protection in oilseeds and cereals in the UK