Polling company, Ipsos, have surveyed 1,000 Italians to gauge public opinion on the issue of animals in research. Asked cold, they found that equal numbers of people thought it was acceptable (49% each side). While this may not equal the levels in the UK, it is a considerable improvement from the 66% of people who found in unacceptable in the 2011 poll (also by Ipsos).

However, when those surveyed were informed about the laws surrounding animal research – the regulations that aim to minimise suffering and replace the use of animals wherever possible – the proportion considering animal research acceptable rose to 57% (to 39% against). This offers hope that by providing more information and being more open about the work they do, researchers in Italy can swing more of the public to supporting the careful use of animals in research. 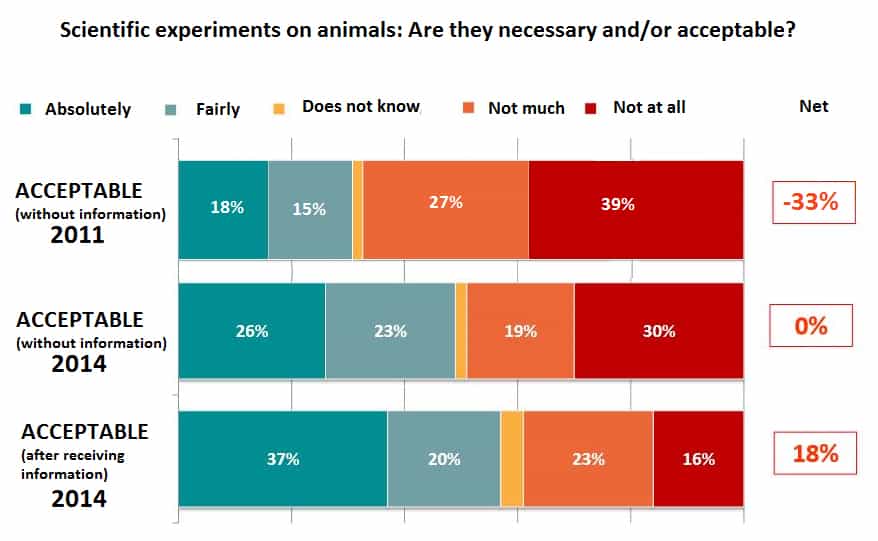 The last few years in Italy has been difficult for research, with animal rights extremists breaking into labs and breeding facilities. After a break in at the University of Milan, around 300 researchers and scientists organised a rally under the banner of Pro-Test Italia (taking their name from the researcher-led demonstrations in support of animal research in Oxford in 2006). The background has moved into the political arena as researchers and animal rights groups battle over the implementation of EU Directive 2010/63.

The result of this friction has been greater public interest in the issue and – seemingly – a better understanding of the issues. The percentage of people who believe animal research can be replaced by alternative methods dropped from 63% to 54%, and should fall further as people understand that EU law bans the use of animals where alternative methods exist. The proportion of the public who believe animal research is “necessary for the advancement of medicine” rose from 51% to 61%. The polls provide as brief snapshot of the views of the Italian public. While they definitely offer hope of better times in the future it is important that they do not become complacent.