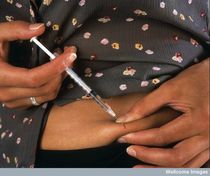 Experiments in mice have identified a hormone that could stop and even reverse the onset of diabetes. The hormone, which is also found in humans, increases the number of insulin-producing cells. Possible clinical trials are still a few years away but if successful, the treatment could replace daily insulin injections with a weekly or even monthly single dose of hormone.

In a new study scientists investigated the replication of the beta-cells in the pancreas. These are the cells responsible for producing insulin. Using mice they discovered that blocking insulin receptors with an injected chemical called S961 led to a dramatic increase in beta-cell replication. However when they applied S961 directly to beta-cells in a petri dish it had no effect; the phenomenon could only by studied using a living animal.

It appeared that the body has ways to compensate for insulin resistance by increasing the number of insulin producing cells. To identify the cause of beta-cell replication the team measured the activity of genes in different tissues of mice given S961, comparing the gene activity to mice that had not been treated. This revealed increased activity of a previously unstudied gene (named betatrophin) in liver and fat tissue. To confirm that betatrophin is responsible for the beta-cell growth, they artificially produced the hormone and injected it into diabetic mice. It raised insulin levels through stimulating beta-cell replication and effectively treated the diabetes.

This is early research but a naturally-occurring hormone that can be artificially produced and used to treat diabetes is an exciting discovery. More research will be needed to find out whether the approach could be adapted to treat people. The scientists believe it could be used to treat both Type 1 and Type 2 diabetes where low insulin production is the problem.