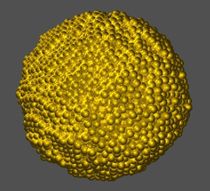 Scientists have used radioactive gold nanoparticles fused to a chemical found in tea to shrink prostate tumours in mice. The technique is believed to be highly specific and should avoid many of the side effects of traditional chemo- and radiotherapy.

Gold nanoparticles are small enough to travel easily through tissue, including tumours. Their use in medicine is not new and nanomedicine is a rapidly growing research field being applied to a range of diseases. In this research, the innovative step was to attach a chemical derived from tea called EGCg to the nanoparticle. EGCg binds to receptors that are abundant on the surface of cancerous prostate cells.

When injected directly into prostate tumours in mice, the EGCg component binds the radioactive nanoparticles to the cancerous cells and stopped the particles leaving the tumour. The radioactivity of the gold isotope is strong enough to kill cancerous cells in close proximity but weak enough to avoid damage to the rest of the prostate gland. This avoids some of the side-effects of traditional treatments for prostate cancer such as urinary incontinence. Tumours were shrunk by up to 80% after 28 days in this study.

With the approach shown to work in mice, the researchers will test it in dogs next. Prostate cancer in dogs is much more similar to the disease in humans. Only after further tests in animals will the treatment be tested for safety and effectiveness in people.