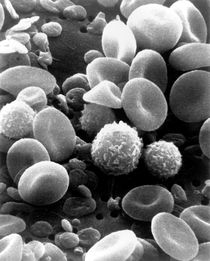 Experiments using cell cultures and mice have shown how a recently-developed class of chemicals slows the progression of a type of blood cancer, and significantly extends the lifespan of affected mice. The research could lead to a new treatment for acute myeloid leukaemia (AML), which is the cause of one in every 100 cancer deaths in the US.

The chemicals, called KPT-SINEs (selective inhibitors of nuclear export) target a molecular transporter called CRM1, which is responsible for transporting proteins between different compartments – the nucleus and the cytoplasm – within the cell. In AML cancer cells, CRM1 becomes more active. By blocking the transporter, KPT-SINEs prevent proteins that cause cells to grow out of control reaching the part of the cell where they function. This slows the progression of cancer.

Mice with leukaemia lived an average of 39 days when treated with KPT-SINEs, but only 27 days if untreated. These whole animal experiments, combined with the cell-culture assays, have allowed scientists to understand the mechanism behind the anti-cancer properties of the chemicals and demonstrated effectiveness. The research team intends to begin phase 1 clinical trials shortly where a few people will be given the experimental treatment to test its safety in humans before more extensive trials will test its potential as a future treatment for AML.