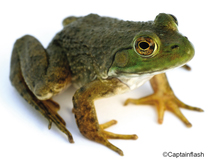 If asked to think of the main challenges facing conservation, most people would suggest habitat loss, climate change and hunting. It is unlikely anyone would say pregnancy tests, but this is just one example of a good intention with disastrous results.

The similarities between different species of animals mean that many diseases can infect a completely new host when given the chance. Human activities can bring new animals into contact with each other, allowing new opportunities for diseases to jump species and flourish in a new host. If it has never been exposed to the disease before, an animal will often have very little resistance and the disease can be incredibly destructive.

Today, about a third of the world’s amphibians are at risk of extinction because of a deadly fungus that has spread throughout the world through pregnancy tests. In 1930 Lancelot Hogben, a researcher from Cape Town, discovered that exposing the African clawed frog to ox hormones caused the frog to ovulate. A similar effect was soon observed for the hormone human chorionic gonadotropin, which is found in pregnant women’s urine. This led to these frogs becoming the standard way to test for pregnancy for the next 30 years.

When the frogs were superseded by new technologies in the 1960s, many of them were released from hospitals worldwide into the wild. Research published last month confirmed that the frogs are carriers of the fungus Batrachochytrium dendrobatidis. This fungus causes chytridiomycosis – a condition where the amphibian’s skin thickens, which prevents it from absorbing salts and ultimately causes the heart to stop.

The African clawed frog is resistant to the fungus, as the disease is endemic in its homeland in Africa. However frog species from other parts of the world have no resistance and so the disease has caused them to die in huge numbers. Researchers are now studying the African clawed frog and the American bullfrog to understand how they are resistant to chytridiomycosis. It appears that there is a genetic factor to this, and there is hope that breeding and/or genetic engineering could be used to protect threatened frog species.

Zoos are obvious examples of bringing different animals species together; species that might not have crossed paths for millions of years now live mere metres from one another, with unintended effects. In 2010 two polar bears in a German zoo became critically ill after catching a mysterious virus. The bears started having seizures and were foaming at the mouth. After one of the bears died, samples of the brain were taken and analysed for clues. Rapid genetic sequencing of the virus revealed that it was an Equine Herpes Virus (EHV) – an infection commonly found in zebras. It is not known how the virus spread from the zebras to the bears (although mice are suspected), but it is a very widespread disease in equines.

EHV can spread rapidly between horses housed in stables, causing abortions in pregnant mares. Numerous studies of horses and mice have been conducted to understand the lifecycle of the virus and how it reactivates after years of latency. This testing has led to the development of vaccines, but currently they only provide limited protection for a limited time. Just like human diseases caused by herpes viruses, such as chicken pox, glandular fever and genital herpes, EHV is difficult to control.

Even our pets can help spread diseases between species. Canine distemper virus (CDV) is a serious disease in dogs: it is easily spread, attacks the central nervous system and kills about 50% of the animals infected. Over the past 30 years, CDV has made the jump from dogs and now infects populations of raccoons, seals and big cats. It is estimated that about 30% of lions in the Serengeti died in the mid-90s from CDV that had been passed from dogs in neighbouring villages. Recently concerns have been raised about CDV infecting the critically endangered Sumatran tigers. As the virus affects the nervous system, it can alter behaviour and there are reports of tigers wandering into villages and failing to run from hunters.

A vaccine for CDV for dogs has been developed but it has not been deployed widely. Targeted campaigns have seen success in the Serengeti and Zimbabwe, but CDV is very widespread around the world. Further research using domestic ferrets and Siberian polecats have led to improvements in the vaccine administered to black-footed ferrets, an endangered species (previously thought extinct) from North America that is now being successfully reintroduced into the wild.

Diseases can be spread in a variety of ways, but toxoplasmosis is one of the stranger ones. The parasite responsible, Toxoplasma gondii, develops and reproduces inside cats and its eggs pass through into the cat’s faeces. The high concentration of domestic cats in our towns and cities has amplified levels of the parasite. The parasite eggs are very hardy and can spread through water supplies to infect a wide range of animals including humans (50% of us are infected!), otters and sheep. In fact, T. gondii is one of the biggest causes of abortion in sheep, pigs and goats worldwide. Testing on sheep has led to a vaccine against T. gondii, Toxovax, that uses a live, attenuated strain of the parasite. Currently the vaccine is only given to ewes before the breeding season, but research continues in the hope of extending its applicability.

When a disease jumps to a new species and spreads like wildfire through a population because of human action, however inadvertent, we have a responsibility to do what we can to mitigate the problem. From the anti-seizure medicine given to polar bears to a vaccine for bovine tuberculosis in badgers, research using animals can be applied to save threatened populations now and in the future.