Over the summer our planet has been hit by multiple reminders of human-driven climate change.. Temperatures have reached a record 49°C in Canada and in the Antarctic an extraordinary 18.3°C.

These temperatures have driven catastrophic floods that killed 160 in Germany while more than 50 died after massive inundations swept through part of China when a year’s worth of rain fell in just three days. At the same time, forest fires ripped through Siberia, Canada and North America driven by unusually hot, dry weather.

Scientists have long predicted such events.

“The warming is right in line with model predictions from decades ago ... but some of the impacts are greater than scientists predicted."

The British Antarctic Survey (BAS) has been studying these events for decades now. The UK’s polar research centre looks at the impact of warming weather on the ice and animals living in the ocean.

“The Antarctic peninsula is one of the areas where climate change is having great and important effects,” explains Simon Morley, an eco-physiologist at the BAS. The goal is to understand the mechanisms at play, improve scientific knowledge and inform government policy.

“Fundamentally, we’ve been learning how animals have evolved to live in the Antarctic environment, and how they’re going to be able to respond, adapt and evolve to change.”

Animals adapt to cold waters in numerous ways. They can, for example, produce antifreeze in their blood, like 70% of fish found in the Southern Ocean. Because the cold slows down their metabolism and the need for oxygen lessens in that environment, certain animals have even become giants. Some of the biggest sea spiders on the planet can be found in Antarctica. But what happens if the waters suddenly warm up?

Morley and his group have been working for nearly 30 years on the invertebrate species that live on the sea floor - limpits, snails, urchins, and sea stars. They’ve been studying the impact of climate change on their daily lives, their ability to reproduce, feed and live, but also how shifts have changed their populations through time. Higher predators - seals, flying birds and penguins - sentinels and indicators of healthy ecosystems, are also monitored to understand what’s happening.

Some animal species are brought back to the UK to be further studied.

“We bring animals into the aquarium labs to genetically screen them, measure their metabolism, their ability to respond to temperature, and how it affects them,” explains Morley. “We introduce factors like salinity and ocean acidification, which we know will be problematic with global warming, but are difficult to monitor or change in the wild Antarctic. In the UK, you can do repeat experiments and optimize data to look at trends over time. That way we can start to understand the limits of the animals we bring back in regards to the warming world. We can then put all the oceanographic, atmospheric, meteorological, cryospheric, and biological data together and start building up the bigger picture to predict what is going to happen in the future.”

At the moment, only invertebrate species are being brought back from Antarctica. But even if they don’t require a license, the BAS adheres to the highest standards of animal welfare when working with animals, in experimental but also non-experimental situations. Morley explains:

“On the ships or the Antarctic stations, you can encounter animals. We have animal welfare procedures and policies that cover these non-experimental situations as well. So our scientists know what to do if a bird flies into a window on the ship for example.”

Overall, the scientists try to minimize interactions with the wild animals.

“But ultimately, you can’t avoid total contact. For example, when studying seals, you have to be there on the breeding beach to look at how many pups are born, how many survive, the age of breeding females and their breeding success, and to take genetic samples to see if animals with certain genomes do better. It’s only through those experiments that you’ll be able to learn what’s going on. What you can do, however, is limit the number of animals you interact with and handle,” explains Morley.

Scientists are always finding new, ingenious ways to refine and reduce their impact on the lives of the animals. Modern modelling and observational techniques, like drones for example, help avoid disturbing the animals.

The data collected is absolutely crucial for the conservation of the animals involved, especially in light of the recent climate crisis.

“We’ve already seen shifts, particularly regarding animals that rely on the ice, and more specifically the sea ice that forms during winter and melts away during the summer,” explains Morley.

The duration of that ice is really important because so many animals rely on it. For example, Krill depend on ice for their early life stages. As the sea ice reduces and moves further south, so does the krill and all the animals that count on it for food, such as seals, penguins, fish and whales. Whole ecosystems are being disturbed, and it is only going to get worse.

Almost two thirds of British people (63%) do not know that is it illegal to test finished cosmetic products on animals in the UK, according to a recent ComRes survey. 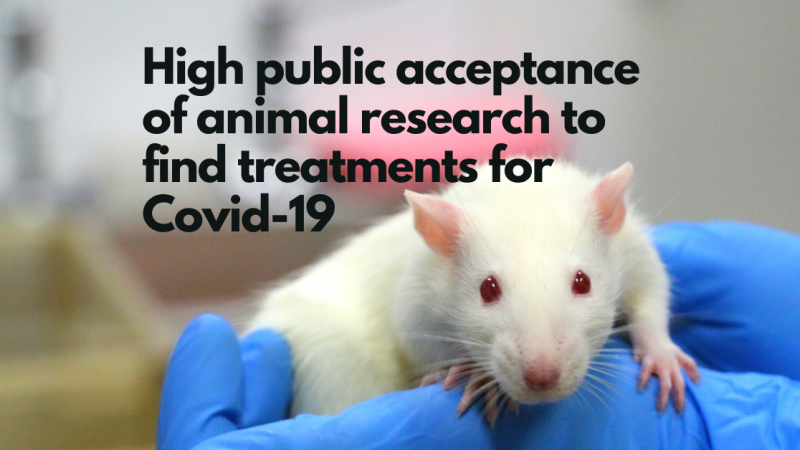 The European Commission has published a survey on the public's opinion of science and technology.