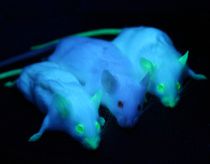 A technique which enables the earliest stages of cancer to be observed in living mice has been developed. The skin of the genetically-engineered mice literally lights up as the animals age or develop tumours, allowing researchers to monitor the progression of the disease in real time, from its earliest moments up until death.

Scientists have long known that the p16 gene has a central role in aging and cancer suppression. By tracking its activity researchers hoped to determine exactly what that role might be. To do this they genetically-engineered mice by adding a fluorescent gene from fireflies to them. In this case the fluorescence gene is switched on when the normal p16 gene is activated.

Throughout the entire lifespan of these mice, the researchers followed p16 activation by simply photographing the brightness of patches of skin on each animal. They found that old mice are brighter than young mice, and that sites of cancer formation become extremely bright, allowing for the early identification of developing cancers. The technique worked in all the 14 different types of cancer tested by the researchers.

They found that even before a tumour developed p16 was active. It was active to suppress the tumour and so causing the cells in danger of becoming tumours to glow. But when p16 failed to fight off the cancer, tumours formed. This allowed the team to monitor tumour formation from the earliest moment. One surprising finding was that p16 was activated in cells near the tumour that were not cancerous, presumably in an attempt to protect those cells from also becoming cancerous.

Another finding was that as the mice aged they glowed more due to higher p16 activity. However this did not lead to cancer in most cases, suggesting that in general p16 is involved in ageing and its role in cancer is a secondary role.

This is not the first time fluorescent proteins have been used to investigate the activity of genes. But what makes this technique potentially very valuable is the insight it gives into the very early stages of cancer. The team now hope to study the activity of p16 in response to different chemo-therapies and the effect they might have in mice of different ages.