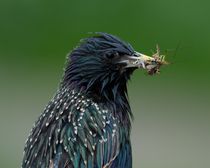 Populations of common insectivorous birds like starlings and swallows are declining in farmland areas with high levels of the neonicotinoid insecticide imidacloprid. This is shown by an analysis of detailed data on local bird population trends and environmental factors, which include imidacloprid concentrations in surface water.

This is the first study that correlates imidacloprid to possible indirect harmful effects – via the food chain – for vertebrates. Imidacloprid is the most widely used insecticide in agricultural systems around the world.

Farmland bird species in Europe have been in decline for many years, but there are unexplained local differences in the extent of this decline. Ecologists in Nijmegen in the Netherlands have explained these differences by identifying concentrations of neonicotinoids in surface water in relation to other factors, such as land use.

Most of the birds studied forage around ditches, hedgerows, and field margins. In this study, the researchers used measures of water quality taken by District Water Boards. Many insects that are important for birds spend part of their life cycle in water. The biologists compared these data sets with a database that records changes in land use.

The researchers found a clear trend: the higher the concentrations of imidacloprid in the surface water, the greater the decline in bird numbers. For the fifteen bird species that were included in the study, numbers decreased on average by 3.5 percent per year in areas with more than 20 nanograms of imidacloprid per litre. This concentration is greatly exceeded in many parts of the Netherlands.

‘The decline in farmland bird species started before 1995, but the local differences in this decline that we have established after the introduction of imidacloprid are not seen in the counts made before that time,’ says Ruud Foppen of Sovon.

Commonly used agricultural pesticide Imidacloprid is used in agriculture and horticulture to treat seeds and bulbs, and as a crop spray in greenhouses and in the open. It affects insects’ central nervous systems, so that they become disorientated and paralysed, and then die. It has also been linked to a decline in bee numbers, and other invertebrates.

The researchers do not yet know precisely what causes the decline. Among possible explanations are a lack of food (insects), eating contaminated insects and a combination of both. For a few species, eating seeds coated with insecticide cannot be excluded as an explanation. It is not clear whether breeding success is declining or mortality is increasing, or both.

‘Neonicotinoids were always regarded as selective toxins. But our results suggest that they may affect the entire ecosystem. This study shows how important it is to have good sets of field data, and to analyse them rigorously. Thanks to our partnership with organisations such as Sovon, we can discover ecological effects that would otherwise be overlooked ,’ says De Kroon.