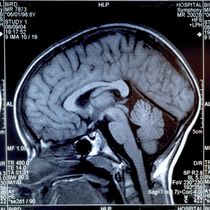 Brain tumours, particularly aggressive gliomas, cannot currently be cured. Treatment by surgery extends life but poses a serious challenge as surgeons are limited by how much tissue they can remove without destroying cognitive and life-support brain functions.

One approach is to use the patient’s own immune system against cancer cells. This should happen naturally but cancer is very good at deceiving the immune system and so scientists need to find a way to turn the tables back in favour of the patient.

In 2007 the group of Professor Kaminska at the Nencki Institute in Poland showed that malignant gliomas re-programme the brain’s immune cells, known as microglia, to support tumour development instead of fighting it. Tumours even corrupt other types of immune cells recruited to the brain from the blood. The research to understand how the tumour pulls off this deception and forces the microglial cells to support and foster glioma-cancer growth has taken several years.

The Polish team has now identified a protein called CSF2 that is almost exclusively found in aggressive gliomas. By genetically modifying cancer cells to rid them of CSF2 protein the researchers found that they could stop the cells forming tumours when transplanted into mice. This showed that CSF2 is essential for tumour development, and a potential Achilles heel.

Building on these findings, the team engineered molecules that can bind to CSF2 proteins and block their action in living mice, without affecting healthy tissue – key to avoiding the serious side-effects associated with chemotherapy. The approach is similar to how current drugs such as herceptin work against breast and stomach cancers.

Another popular route to finding new cancer treatments is testing established anti-cancer drugs currently used on other classes of cancer. A team in New York are doing just that, with some promising early results in animal experiments.

Decitabine is approved to treat a pre-leukemia condition called myelodysplastic syndrome. In a recent paper, Timothy Chan’s team at the John Hopkins Medical School showed that the drug prevents a rogue protein from modifying DNA and causing uncontrolled cancerous growth.

Mutations in the IDH1 gene are found in over 70% of intermediate gliomas. Previous work by Chan found that the protein produced by mutant IDH1 has a dangerous ability to attach molecules called methyl groups to DNA, altering gene activity and eventually causing cancer. Knowing that decitabine strips methyl groups off DNA, Chan thought the drug might prove effective against IDH1-containing gliomas.

Chan’s team took IDH1 positive tumour cells from a patient, treated them with decitabine and injected them into mice. Mice that received untreated cells developed tumours within seven weeks, whereas those receiving cells treated with the drug did not. These are only early animal studies but because decitabine is already licensed for other forms of cancer Chan hopes to move quickly into human trials.