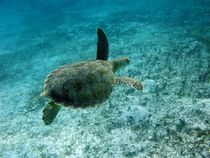 A new study has found that 42 countries or territories around the world permit the harvest of marine turtles – and estimates that more than 42,000 turtles are caught each year by these fisheries. The research, carried out by Blue Ventures Conservation and staff at the University of Exeter’s Centre for Ecology and Conservation, is the first to comprehensively review the number of turtles currently taken within the law and assess how this compares to other global threats to the creatures.

While bycatch and illegal fishing currently present greater threats to marine turtles killing hundreds of thousands of turtles each year, leading to all seven marine turtle species being listed on the IUCN Red List of Threatened Species. The researchers estimating a minimum of 65,000 turtles taken from Mexico alone since the year 2000.

The researchers collated data for all seven species of marine turtles from over 500 publications and 150 in-country experts. They estimate that currently more than 42,000 marine turtles are caught each year legally, of which over 80% are green turtles. Legal fisheries are concentrated in the wider Caribbean region, including several of the UKs Overseas Territories, and the Indo-Pacific region, with Papua New Guinea, Nicaragua and Australia together accounting for almost three quarters of the total.

The scale of global illegal capture is likely to be severely underreported due to the difficulties collecting information on such an activity. Conservation awareness at an international scale has led to greater protection of marine turtles, with 178 countries now signed up to the Convention on International Trade in Endangered Species of Wild Fauna and Flora (CITES) restricting the international trade of turtle products, however 42 countries have no legislation in place that prohibits the harvest of marine turtles, although for many of these countries these harvests provide important sources of protein or income.