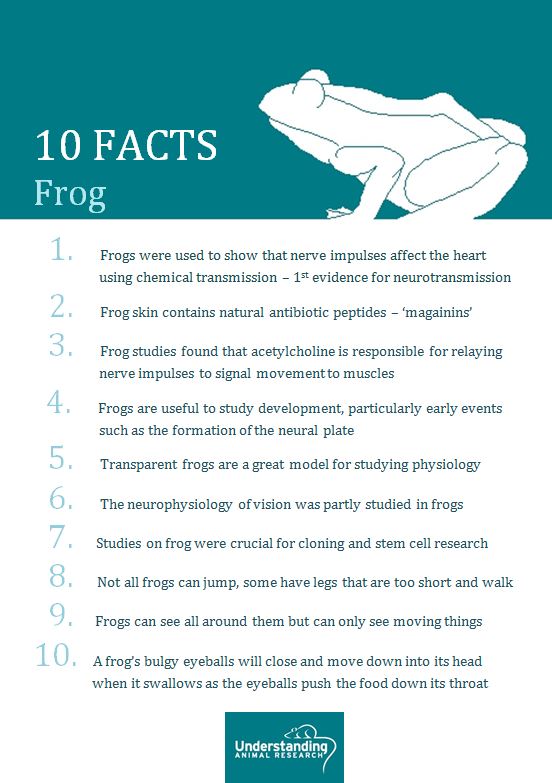 Otto Lewis was the first to publish a series of papers describing neurotransmission in frogs showing that nerve impulses affect the heart using chemical transmission.

Loewi connected a frog’s heart, with the still attached, to a small glass container filled with ringer solution. Stimulating the nerve fibres electrically, he noted that the number and strength of the heart beats depended on the stimulation of the sympathetic and parasympathetic nerve fibres.

Another perculiarity of frogs which of interest to science is their ability to survive in bacteria-filled water without wounds becoming infected. Studying this property of Xenopus laevis, Michael Zasloff, discovered a new class of antibiotic compounds in 1987.2 Their skin contains natural antibiotic peptides which he called 'magainins'. They are active against many disease-causing organisms, and may provide a future solution to the problem of antibiotic-resistant bacteria. They also present new questions about the immune system and whether higher animals have a similar front-line chemical defence against disease.

3.       Frog studies found that acetylcholine is responsible for relaying nerve impulses to signal movement to muscles

Frogs have been used as research models for many years. Their physiology is relatively simple when compared to mammals, and the study of frog muscles in the 1920's led to the discovery that the neurotransmitter acetylcholine was responsible for relaying nerve impluses signaling movement to the muscles.

4.       Frogs are useful to study the development, particularly early events such as the formation of the neural plate

The African clawed frog, Xenopus laevis, is often used in early studies of development. They produce very robust embryos, which can be easily observed at all stages. They have been particularly useful for studying very early events, such as the formation of the neural plate, which develops into the nervous system.

5.       Transparent frogs are a great model for studying physiology

Recently, the first transparent animal with four legs was developed a Horoshima University in Japan. Japanese brown frogs Rana japonica, were bred, selecting for the recessive trait of light-coloured skin, until fully transparent frogs were born. The internal organs, eggs and other internal parts of the frog can be clearly viewed through the skin, making it a great model for studying many aspects of physiology in a whole, living body. Transparent frogs will prove useful as laboratory animals because they make it easier and cheaper to observe the development and progress of cancer, the growth and aging of internal organs, and the effects of chemicals on organs.”

6.       The neurophysiology of vision was partly studied in frogs

The 1967 Nobel Prize of Physiology or Medicine was awarded to Ragnar Granit, Haldan Keffer Hartline and George Wald for their work on the primary physiological and chemical visual processes in the eye, partly done on frogs.

George Wald worked on the eye pigments and identified Vitamin A in the retina and elucidated the mechanisms by which light triggers the rod-shaped sensory cells of the eye into action, the first step of vision. Ragnar Granit identified the three types of cone-shaped sensory cells in the retina, each of which is sensitive to a different segment of the visual spectrum of light, allowing us to perceive color. He was the first to demonstrate that nerve fibers in the retina are sensitive in different ways to different wave lengths. Haldman Keffer Hartline went into deeper anatomical studies showing how the rods and the cones of the retina are connected in the brain.

7.       Studies on frog were crucial for cloning and stem cell research

The 2012 Nobel Prize in Physiology or Medicine was partly awarded to John Gurdon for his work towards the development of stem cells from specialised mature cells in cells. Stem cells are of great interest in medical research because they can form into nearly any type of cell in the body.

In 1962, John Gurdon successfully cloned a frog. By taking the nucleus from a cell in the intestine of a tadpole and placing it in an egg cell, it developed into a fully functional tadpole. Not only was this a tremendous achievement, it also provided the definitive proof that a specialised cell in the body still contained all of the genetic material required to produce the entire organism. This launched the field of cloning, which has had notable successes since with Dolly the sheep and recently the cloning of a human skin cell to extract embryonic stem cells.

Frogs are known for their ability to leap and jump. Long-legged frogs use quick, powerful jumps to escape from predators. A jumping frog can leap away from danger in an instant and hide safely in the water. Not all frog species can jump. Frogs with shorter legs walk, crawl, or only hop short distances. Most toads are better at walking or hopping than jumping.

9.       Frogs can see all around them but can only see moving things

Frog eyes bulge outward to enable them to see in all directions, though their eyes appear to stare blankly. However, A frog can only see moving things. It could literally starve to death with live prey in front of it if the prey never moved.

Frogs have a third eyelid which helps protect their eyes underwater and keeps them moist on land and some frogs even have a patch on top of their heads which is like a third eye. It reacts to light to aid the frog in navigation.

10.   A frog’s bulgy eyeballs will close and move down into its head when it swallows as the eyeballs push the food down its throat

Frogs don't have the necessary muscles to chew their food. Instead, frogs use their eyes to force their food down their throats. This is why it looks like a frog is blinking when it is eating. Its eyes are actually sinking down inside of its skull to push down on the food.