Why Testing on Prisoners is a Bad Idea

I recently wrote an article for Huffington Post UK on why we should support the new dog breeding facility to be built in Yorkshire. Like many articles dealing with animal research the comment section has a recurring theme – why not use convicts? This is usually (but not always) qualified by suggesting such testing be limited to the most violent offenders (usually murderers and paedophiles). Here is a selection of the comments found below the article: 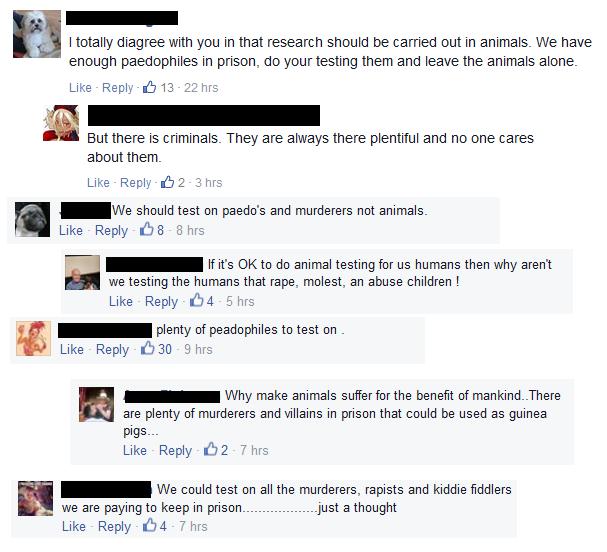 Perhaps I should be unsurprised by the number of commenters supporting testing on convicts, given that support for capital punishment for those convicted of certain crimes has generally been over 50% in the UK (though dropping to 48% in 2014).

But what about the scientific and practical issues relating to the use of prisoners in research?

We will, for the sake of time, ignore the legal arguments. But it should be noted that in order to allow the forced testing of prisoners in the UK we would have to withdraw from numerous UK and EU laws such as The Human Rights Act, 1998.

I am also putting aside the ethical arguments. Following World War II and the discovery of medical experiments on prisoners at Nazi concentration camps, the medical community came up with a set of 10 ethical principles called the Nuremberg code, which ruled out human experimentation without informed consent, and insisted that such research should only happen after prior knowledge gained from animal experiments. This was later built into the Declaration of Helsinki. The ethical debates are wide-ranging, but many of the arguments for and against align closely with those for and against the death penalty.

Medical Histories – do we have them for prisoners?

When scientists want to conduct an experiment to test a theory, they try and limit all other variables. So if researchers want to understand if a medical intervention is having a positive effect, they need to make sure that food, temperature, liquid intake, prior health etc, are as similar as possible. This can be done in animals, where such variables have been controlled and recorded; often since the animals’ birth. From this the researcher can see the benefits (if any) of the intervention, and begin to make conclusions knowing that the only thing that differed between the control group and the main group was the intervention.

This same is not possible with prisoners, whose medical history will be more limited. The individual could have picked up natural immunities to all manner of diseases, creating confounding variables in the research. Many of those in prison have past problems with drugs or alcohol, or other health related issues which may interfere with the experiments.

Genetics research – how could it be done?

There were almost 280,000 procedures done in 2013 to look at genetics. However, there were many more procedures where genetics were studies in relation to other diseases. For example, researchers may have been interested to know whether a certain gene was a risk-factor in cancer, or whether blocking a certain protein (coded for by a gene) would treat the symptoms of heart disease. In 2013, 52% of all procedures involved the breeding of a genetically modified animal – this is over 2 million procedures.

So, much research into genetics requires scientists to breed mice with certain genes turned on or off in order to understand what effects this has. This obviously has ethical problems with humans; surely the prison-born offspring of a guilty prisoner should be treated as innocent (and thus not eligible for testing). Even if we swept such ethical considerations aside, human reproduction takes 9 months to produce one baby, and then another 15-17 years for the offspring to reach sexual maturity. Mice can reproduce in 20 days, and the offspring are sexually mature within 6-8 weeks. A researcher can study the inheritance and effects of a gene over multiple generations of mice within a single year – the same research would take a lifetime to conduct in humans. The result is that many genetic studies would be almost impossible to conduct in prison populations.

Numbers – are there enough prisoners?

Currently, it is illegal to give a new medicine to a human volunteer until it has been safety tested in animals. This toxicology testing involves giving the new compound to animals and then carrying out a post-mortem examination in order to see if any harm has been done to any part of the animal. Thus toxicology testing using prisoners would necessarily mean the death of the individual. At the moment, around 109,000 animals are used each year in the safety testing of pharmaceutical compounds in the UK. How does this stack up with our prison populations?

Let’s have a look at the prison populations. In 2013 there were 83,842 prisoners – but our commentators want us to limit ourselves to the worst offenders. So limiting the population to those sentenced to more than 4 years (serious crimes) for either violence against a person (which includes murder, manslaughter as well as slightly less serious offences such as assault etc) or sexual offences (which include rape and paedophilia) leaves us with just 21,572. 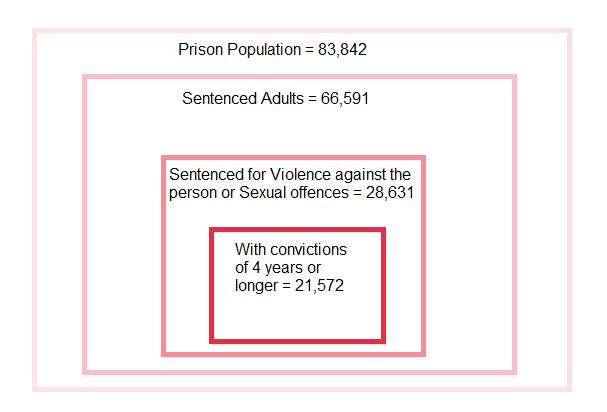 Alternatively, we could have looked at the annual sentencing. Most violent crimes that people have mentioned in the comments were either violent sexual offences (rape or paedophilia) or murder. Of the 3,687 custodial sentences for sexual offences in 2014, fewer than 2,800 were for serious crimes where the average sentences were over 2 years (which would certainly include rape and paedophilia). Of the 11,098 “violence against the person” custodial sentences, fewer than 700 were crimes involving death (murder, manslaughter, or a driving offence involving someone’s death). So overall we have up to 3,500 new serious violent criminals being added to the potential convict testing numbers every year.

In the UK we conduct around 4 million procedures on animals each year (4.1 million in 2013). Even if humans could be used more often, and even if fewer of them were needed for each experiment, it seems hard to square the 4 million procedures with either the 20,000 or so violent criminals in prison at any one time, or the 3,500 new ones coming into the system each year (as others complete their sentences and leave). Even if we just used prisoners for toxicology testing, this currently requires around 375,000 animals each year in the UK.

A final area where human research makes no sense (prisoner or otherwise) is veterinary science. While not all treatments are initially developed using the target species (a mouse may help develop a cancer treatment which is eventually given to dogs), the target species will need to be used at some point to test safety and efficacy. Such research could not be done on humans. Just as we use clinical trials on humans to determine the final safety of a new human treatment before it goes to market, so we use animals to test the safety of a new veterinary treatment for that animal before it can be used commercially.

Image: By Government of Japan [Public domain], via Wikimedia Commons