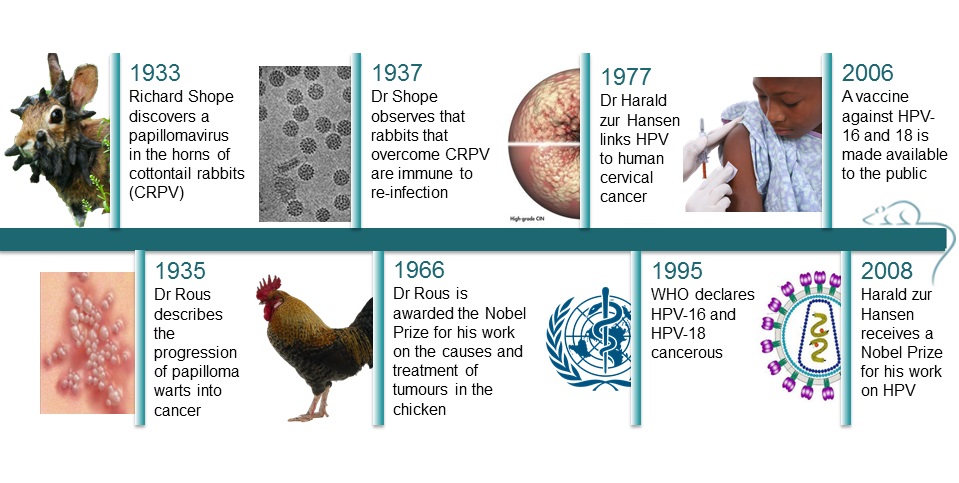 If you saw rabbits running around with horns on their heads, your first reaction probably would not be to catch them, remove and grind up their horns, filter a mixture made with the grindings through porcelain to recover particles smaller than cells, and then re-inject those particles into other rabbits.

Probably not, but Richard Shope did in 1933, and the injected rabbits started growing horns too, hinting that viral particles might be responsible for the outgrowths. The horns were in fact warts, and Shope’s work led to the discovery of the cottontail rabbit papillomavirus (CRPV), a cancer-causing virus. (15)

Animal and human papillomaviruses have a lot in common and the cottontail rabbit was the first animal model for cancer caused by a virus. It helped enormously in the development of vaccines against cervical cancer, especially because the Human Papillomavirus (HPV) could not be replicated in cell culture, nor could it be transmitted to other mammals. (1)

HPV is responsible for over 80% of cervical cancers in women and 70% of throat cancers in men. (2) About 79 million Americans, mostly in their late teens are infected by the virus. (3) The virus inserts its own genetic code into an infected cell and either destroys it to release viral particles or transforms it into a cancer cell giving it viral properties such as unlimited growth. The study of the basic mechanism of cancer formation started in squirrel monkeys. (14)

Cervical cancer kills more women worldwide than any other type of cancer apart from breast cancer. It accounted for 270,000 deaths in 2012, 85% of which were in developing countries (5) and 530,000 new cases were declared in 2008 by the International Agency of Research on Cancer. There are over 100 different types of HPVs including 30 that are sexually transmitted. (1)

It took a while before scientists fully accepted that a virus could be responsible for cancer. Currently, there are six viruses recognised as potentially oncogenic in humans. (3) In 1935, Dr F. Peyton Rous described the progression of the papilloma warts into cancer, for which he received the Nobel Prize in 1966. However, it wasn’t until 1995 that the World Health Organization (WHO) declared that HPV-16 and 18 were cancerous.

In 2002, Dr Saverio Campo from Glasgow University describes “ a paradigm shift in the late 1970s for some viruses to be recognized as ‘tumour viruses’ in humans”. (16)

Indeed, in 1977, Dr Harald zur Hansen published the first research linking the papillomavirus directly to cervical cancer, which was confirmed in the early ‘80s when he isolated two previously unknown types of HPVs – HPV16 and 18 - from cancerous tissues. The results were undeniable, and researcher later found that those two HPV types specifically are responsible for 70% of cervical cancers in women. (17) The remaining 30% are caused by 13 other types of HPV. (3)

The reason why it took so much time to confirm that viruses can cause cancer is essentially because viruses are necessary but not sufficient to cause cervical cancer. Most HPV infections do not result in cancer - most are cleared by the immune system or are simply not dangerous. More than half of sexually active women are infected with HPV but only a small percentage go on to develop cancer. (1) The virus needs an extra ‘push’ to cause cancer. For example, Bovine papillomavirus (BPV) only causes cancer in cattle that eat bracken. Risk factors such as smoking, genetic predisposition, or even side effects from the body’s defence mechanisms could trigger cancers in humans. (9)

In 1937, Shope noticed that the rabbits that overcame a CRPV infection were immune to reinfection. Using CRPV in rabbits, BPV in cattle and canine oral papillomavirus, researchers found that whichever the animal, it was possible to protect against the papillomavirus. Thus it was possible to stop the development of the papillomas or the cancers through various methods of immunization.

Creating a vaccine was problematic because even the DNA from deactivated virus can cause cancer. Additionally, each papillomavirus can only be cultured in its respective host species. Species-specific vaccines were created in the 90s for rabbits, cows and dogs using the viral outer shell, and all promoted high levels of antibodies and were 90% effective. (18)

Eventually John Kneider came up with a way to grow human papilloma virus (HPV) in nude mice. These mice have a defective immune system that does not reject tissue transplants from other animals so Kneider transplanted human cervical tissue and foreskin tissue onto the mice, which were then used to test for a vaccine. (3)

This led to two vaccines being introduced for humans in 2006 against the two major cancer causing HPVs, 16 and 18. Since then there has been a 56% decline of infected 14 to 19 year old in the US, even though only a third of this population has received the vaccine.

“This report shows that the HPV vaccine works well and this should be a wake-up call to our nation to protect the next generation by increasing HPV vaccination rates” said CDC director Tom Friedman, “Unfortunately, only one third of girls aged 13 to 17 have been fully vaccinated with an HPV vaccine. Countries such as Rwanda have vaccinated more than 80% of their teen girls. Our low vaccination rates represent 50,000 preventable tragedies – 50,000 girls alive today will develop cervical cancer over their lifetime that could have been prevented if we reach 80% vaccination rates. For every year we delay in doing so, another 4,400 girls will develop cervical cancer in their lifetime”. (4)

However, HPV-16 and 18 only account for 70% of the HPV linked cervical cancers there are still remains 13 other HPVs the current vaccine doesn’t protect against. The vaccine needs to affect a broader spectrum of the virus. A ‘next generation’ vaccine that protects against 9 types of HPV, which account for 85% of cancers, may be an answer. (6, 7) That coupled with a boost in cervical cancer screening could save up to 10 million pounds each year to the UK NHS. (8)

So where do dolphins fit in all this? Well it turns out humans and dolphins have more in common than genital warts. “We discovered that dolphins get multiple infections of papillomaviruses.” said Hendrick Nollen, a marine mammal biologist “Dolphins are the only species besides humans that are known that can harbour co-infections, or infections of multiple papillomavirus types in the genital mucosa.” Up to 8 HPVs have been reported in humans at the same time. Co-infection is believed to be one of the biggest risk factors for the development of cervical cancer in humans. “Dolphins can provide a unique window into the role of co-infection in human cervical cancer”. Dolphins are also exceptional in that they don’t develop the disease even when infected by the virus. “ If we can figure out why, the human medical community might be very interested in how that information might be applied to human strategies for preventing the disease.” (10, 11)

The discovery wouldn’t only benefit humans, but also all sorts of animals, from whales to birds. The papillomavirus in horses is very similar to the human virus, which means that similar vaccines were developed – the technologies were transferable from one species o the next. (12, 13) The story started with cottontail rabbits and might end with dolphins, but hundreds of species could benefit from the knowledge and the cures they have and will help us find against this cancer causing agent.

(14) MRC National Institute for Medical Research, A century of science for health