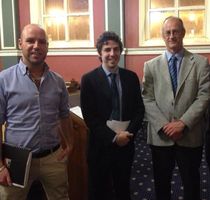 A lively debate at the Trinity College Dublin Philosophical Society last Thursday rejected the motion that “This House Believes that Animal Testing is a Moral Hazard”.

Tom Holder from UAR joined three students in explaining both the moral and scientific case for the continued use of animals in medical research. In opposition was the Director of Antidote Europe, Andre Menache, John Carmody, Campaign Director of Animal Rights Action network, and two student speakers.

The debate was lively, with most student debaters choosing to focus on the philosophical angle, developing and destroying arguments for and against animal rights, human contractualism and utilitarianism.

Dr. Menache chose to focus on scientific issues, including TGN1412 and looking at recent developments in replacement heart valves. John Carmody expressed the view that students were a victim of society if they supported animal research, and suggested that animal rights was an inevitability.

Tom gave a well-received speech that pointed to the past successes of animal research and explained the many levels of protection that animals in labs are afforded. He noted that Stage I clinical trial disasters such as TGN1412 were so rare because of animal safety tests.

He explained that advances in synthetic heart valves had only been possible through research with animals – pointing out that for many years there was no non-animal replacementavailable. Tom concluded by stating that animal research was “not a moral hazard but a moral imperative“.

When the time to vote came, the nays took two-thirds of the chamber, out voting the ayes two to one. This house did not believe that animal research was a moral hazard.