The Zika virus has made the news and not in a good way. After it was linked to several cases of foetal microcephaly – a congenital anomaly where the foetus is born with a cranial cavity smaller than average due to an inflammation of the foetal brain – the World Health Organization (WHO) declared the virus a public health emergency of international concern on the 1st of February this year.

This happened just after Brazil had raised concerns about the virus. It is estimated 1.5 million people have been infected in Brazil, after only the 8 months since the Zika virus was first detected in the country. It is suspected to have entered the country,  during the football world cup.

But, contrary to what one might think, the virus is not new to researchers. It was first discovered in 1947 in a sentinel monkey, Rhesus 766, that was being used to monitor for the presence of yellow fever in the Zika forest of Uganda. At the time, serum from the febrile monkey was inoculated intracerebrally into mice. All the mice became sick, and the virus isolated from their brains was called Zika virus.

The Zika virus is a member of the flavivirus family which also includes yellow fever virus, and dengue virus,  all transmitted among humans by mosquito bites.

“When a mosquito feeds on a person infected with Zika, the virus ends up in its stomach. In most species of mosquito the virus is destroyed by digestion. However, in Aedes aegypti and Aedes albopictus mosquitoes the virus can cross the stomach lining and multiply in all the organs of the mosquito,”

explains Anna-Bella Failloux, entomologist and head of the Arbovirus and vector insects unit at the Pasteur Institute in Paris.

Researchers, such as AB Failloux and her team, are looking at the mosquito to study its susceptibility to contract the Zika virus but also the progression and evolution of the virus in the insects. Understanding how the virus enters the body and organs of the insect and how they coexist with it could help understand how it works and progresses in humans and eventually contribute to finding a cure and block its transmission to humans. The researchers want to establish the role of the mosquitoes in the dynamics of the epidemic.

Understanding how the virus works

The Zika virus had been until recently little more than a scientific curiosity – only about 20% of those infected seemed to show symptoms including rash, fever, joint paint, red eye, and headache. Asymptomatic in most people infected, the disease is usually mild and can last for up to one week. Nothing to worry too much about it was thought.

But the rapid spread of the virus, and connection to the development of Guillain-Barré syndrome – a disease causes progressive muscle weakness due to damage of the peripheral nervous system by the body’s immune system - and the rare birth defect of microencephaly have drawn plenty of attention from the public and from government officials.

The most urgent priority on the ground, beyond controlling the spread of the disease, is research to answer basic but crucial questions on how the virus works.

Researchers have had to build everything from scratch. Failloux and her team have suggested to use mostly immuno-compromised mice, as in Chikungunya studies. However, mice are not a natural carrier for the Zika virus, so their immune system need to be shut down for the virus to inoculate the animals.

Thomas Friedrich, an Associate Professor at the University of Wisconsin and his team are trying to answer some fundamental questions on how the virus works using macaques. Working with University of Wisconsin researchers David O’Connor, Jorge Osorio, and others, the team wishes to understand the basic biology of Zika virus: where in the body it replicates, to what level, and for how long. They also want to work out the relationship between the viral load in the mother and microencephaly in her child by monitoring the virus in a wide range of tissues in macaques at different stages of pregnancy.

Monkeys are naturally infected by the Zika virus, and can be use to model very closely an immune response. Where the mice need to be immuno-compromised to be infected, the monkeys don’t. The virus might not behave in the same way in immuno-compromised animals and might not model the human’s response as well.

“Different animal models are useful for different questions and each don’t predict what is going to happen at 100% but they guide us to the right answer,” explains Prof Friedrich.

Rhesus macaques can be a better model for this type of virus, especially because their immune responses closely resemble those of humans. Moreover, the stages of foetal development in macaques are very well characterized. Studying the effect of the virus on the foetus would be backed by very rich and well described data.

The Wisconsin lab has already started a dose study in male macaques using human strains of a Zika virus found in French Polynesia which is more than 99% identical to the strain found in South America. They are looking at how much of the virus is needed for an infection and where it goes in the body. The data is published online is real time. Releasing the data to the scientific community will help speed up research but also allow for fewer animals to be used if each research groups know what others are doing. The information that is gained from each animal is maximized that way.

If the virus behaves the same way in macaques as it does in humans, researchers will be able to glean information by infecting monkeys with varying doses of Zika — data that would be impossible to gain rapidly or ethically from people.

Researchers are also looking at marmosets as potential models for the disease if they can be infected. There is to date no solid evidence of non-primate reservoirs for the Zika virus, but one study did find antibodies to Zika in rodents, so the search may continue.  All these questions will help establish an animal model for Zika virus infection in humans.

How to fight the virus

Not all humans are equal when faced with the Zika virus. The Functional Genetics of Infectious Diseases unit of the Pasteur Institute in Paris, led by Anavaj Sakuntabhai, is working on human genetic susceptibility to Zika viral infection. By mapping genomic regions with genes that confers resistance to Zika viral infection, researchers hope to test candidate genes residing in the regions by in vitro infection experiments. They are screening several mouse strains to identify a suitable mouse model.

Regardless, to date, there are no treatments to cure the disease – except painkillers to relieve the symptoms - and no licensed vaccines to prevent an infection of the Zika virus. However, once scientists understand enough about the Zika virus to begin developing a cure and a vaccine, animal research will be the foundation of vaccine and treatment development. Even then, no vaccine is likely to be available before at least 18 months according to the WHO.

Inovio Pharmaceuticals of Plymouth Meeting, Pennsylvania, boasts it already has an experimental Zika vaccine containing nothing more than a plasmid made of Zika genes. CEO Joseph Kim says his team already has begun tests in mice. However,

“By the time the vaccine is available, the South American population might have already become partly immune to the virus, just like in other worldwide population, making the vaccine less useful” suggests Prof Failloux.

Because there isn’t a vaccine yet to fight the Zika virus, the only thing left to do is to wait for the population to become immune, or fight the mosquitoes. This latter option involves fumigation and removing sources of stagnant water where mosquitoes can breed. British firm Oxitec has also developed genetically engineered mosquitoes to try and limit the spread of the disease. Let losse, the mosquitoes mingle with the wild populations and produce offspring that do not survive to adulthood, causing the population to decrease.

For Anna-Bella Failloux, this process could be dangerous. She says eradicating a species of mosquitoes only means that a new ecological niche frees-up and other mosquitoes can move in, such as Aedes albopictus. This could be a more useful method if it was applied simultaneously to several species. But again, this is unlikely to be a long-term solution to the Zika virus.

Also a new section in research in the news is dedicated to the Zika virus: http://www.animalresearch.info/en/medical-advances/research-the-news/zika/ 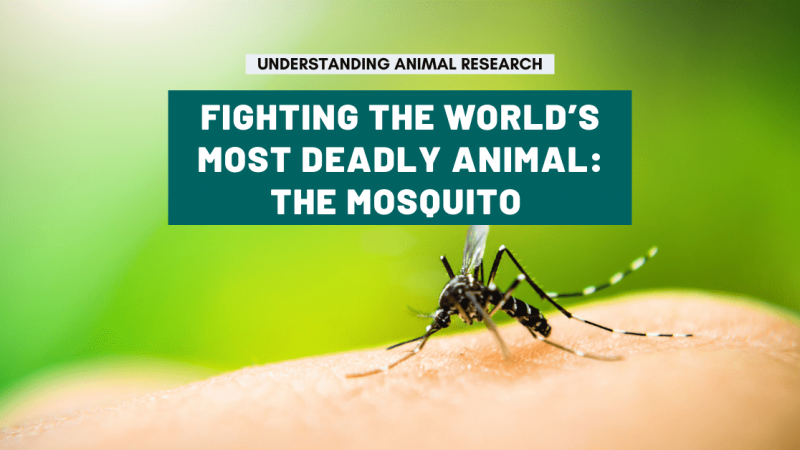 Fighting the world's most deadly animal: the mosquito 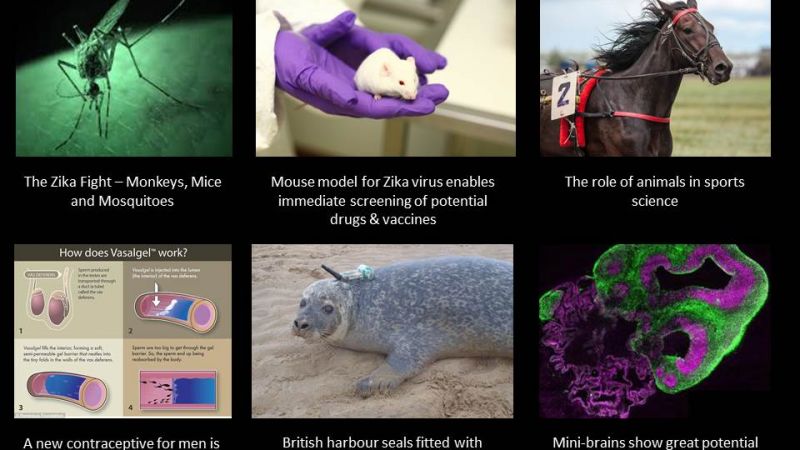 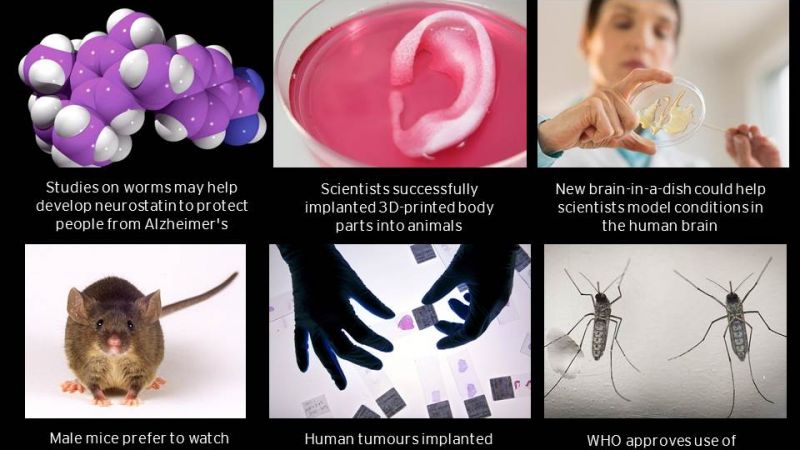